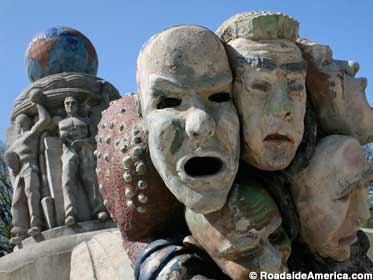 This government-funded sculpture/fountain, unveiled in 1938, is a two-mile hike from my door and has always fascinated me. It’s found in Roosevelt Park, Edison Township. As a little boy I used to stare marvelingly at the great globe that topped the fountain. It wasn’t till I was older that I saw the whole thing.

“Light Dispelling Darkness” features heroic figures representing Science, Industry, Agriculture, and Labor–sure, we can always trust these!–triumphing over the ills of the world: war, poverty, disease, capitalism (!)… Well, it was the 1930s and the useful idiots in the Roosevelt administration thought communism and socialism were the way to go. That’s why the “evils” are so creepy–you’ve got to admit, the sculptor had a touch of brilliance–and the purely secular heroic Answers to Every Problem look like their names are Boris, Vladimir, Yuri, and Smerdyakov, etc.

Here’s an article with more pictures (https://www.roadsideamerica.com/story/16870). Probably you’ve never seen anything quite like this before.

Because of low hillocks, if you want to see the whole thing, you’ve got to walk right up to it. Now and then the parks service has to refresh the paint job. And perhaps you’ll sigh, reflecting on the fact that just a year after this statue was unveiled, World War II broke out. And after that, we discovered that the only things that communism was really good at creating were prison camps and mass graves. The Heroic Answers turned out not to be the answers, after all.

The vanity of human wishes, as Samuel Johnson used to say.

One comment on “A Closer Look at ‘Light Dispelling Darkness’”