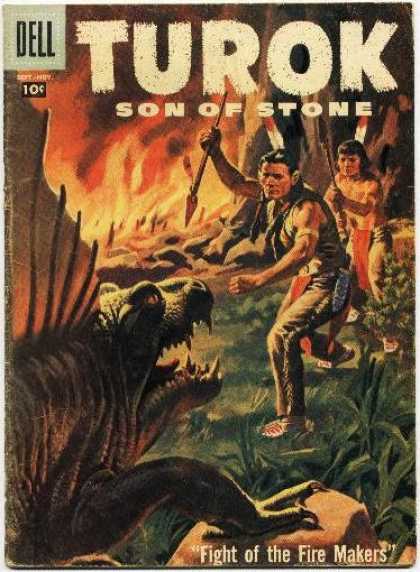 Yesterday Elder Mike reminded me of one of my favorite comics that I used to read when I was a boy–Turok, Son of Stone. For 10 cents a pop, you could follow the adventures of two Native Americans, Turok and Andar, in a lost world of prehistoric monsters and cavemen. The first issue came out in 1954.

I remember reading these on Grandma’s porch, enthralled, my imagination vividly responding to the pictures. Turok and Andar blundered into this place and couldn’t find their way out, so they had to learn a lot of new survival skills in a hurry. They called the dinosaurs “honkers,” for the noises they made. My favorite was “Ruuuuunk!”

All right, it was all a bit corny, but you don’t see that when you’re nine or ten years old. I just saw the dinosaurs–and wished we had some in the woods next to my house.  To this day I’m fascinated by dinosaurs. I don’t read comic books anymore, but I might break that rule if someone handed me a stack of Turoks.

I hope I never find out.