As we ignore the Stupor Bowl (owners who’d sell their mothers to the Chicoms for a dollar, and players who detest America), here are a few things we can think about instead.

In the drug store yesterday, I saw that the wall was covered with blown-up black-and-white photos of Main Street, Metuchen, my home town. The photos of the various stores and other businesses were very familiar. These were the buildings I grew up with. I was in most of them. But they are billed as “Old-Time Metuchen.” What does that make me? (I remember when Hammurabi was our mayor…)

On Park Avenue, heading into South Plainfield, all the older, regular houses have been torn down and replaced by stuff that looks like they took it from Brideshead Revisited.

Here’s one of them: 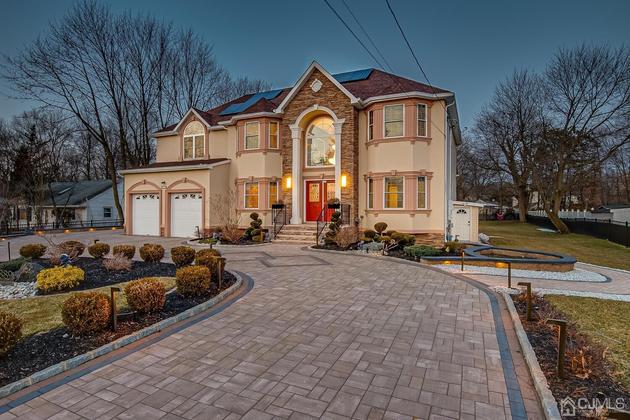 Crikey! Who lives in a place like that? Do they have a butler? And this is just one of many houses equally grand. Where did all the ordinary people go?

Reading Waverly, Sir Walter Scott’s first novel, I can’t help noting how differently stories were told 200 years ago. Today, reading a novel is like going to the theater, sitting down, the curtain rises, and you watch the play. Back then, it was more like you sit down in the theater and watch the carpenters build the sets, the decorators paint the sets, actors get hired and rehearsed… and if you’re still alive after all that, they finally get around to performing the play. Readers sure had a lot more patience in 1820 than they have today.

And I’ve just seen Violet Crepuscular rolling a large snowball across the yard next door, so I guess that’s my cue to move on.