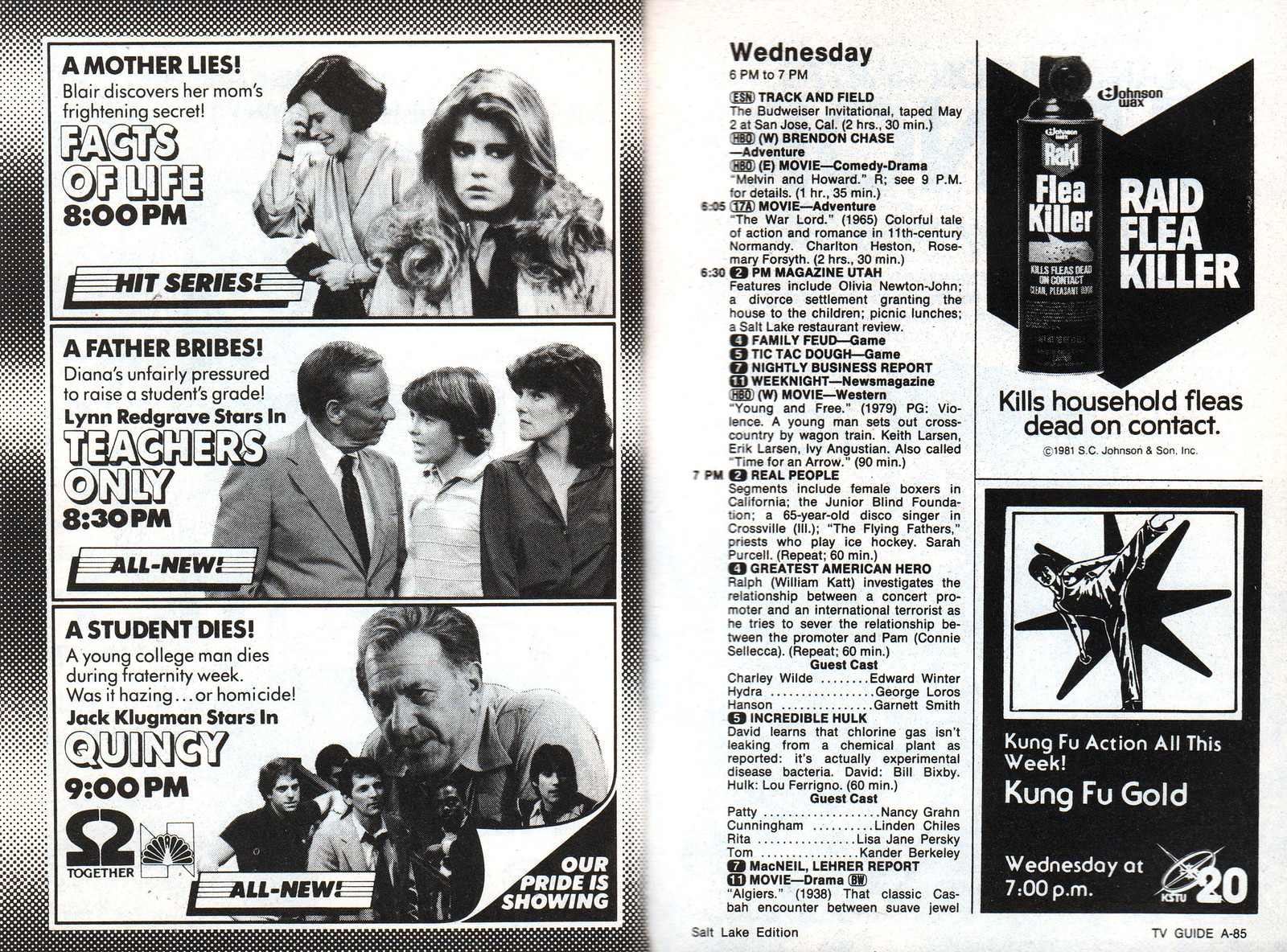 G’day! Are you ready for TV that’ll make your tails curl? Well, we’ve got it! Right here.

I’m Byron the Quokka, and this is Quokka UTV’s menu for the weekend. Take a break from playing Clue and catch some of these fantastic shows.

Pay no attention to this show’s unfortunate name; it’s not what you think. Co-anchors Barbie Schnickelgrussen and Sammy the Koala (who doesn’t speak) cover world events that no other news show covers! Winner of the Oh Who Cares! Award for three years running.

Lear and Lois Fishwife (Robert Young, Laura Bush) have their hands full with their three moronic sons, Moe, Larry, and Goofy (all played by hand puppets). This week, Moe is grounded for using dish detergent as salad dressing; and the college sends Larry and Goofy home as punishment for hiding under other students’ beds. Dean Zingo: Harry Guardino. Prof. Zongo: Y.A. Tittle.

He can’t cook anything else, either. This is the show that makes your worst culinary disasters look like four stars from Gordon Ramsay. Featuring the June Taylor Dancers, which makes the kitchen kind of crowded, even dangerous, when they do those high kicks. This week: Yan can’t pour Cheerios into a bowl, poor guy.

“The Killer Wore a Sarong” (Turkish-Hittite, 1997) stars Jobbo the Stuffed Gorilla as hard-boiled private eye Rocky Pocky: inspired by the short-lived comic strip, “So Funny Ha-Ha.” Rocky has his work cut out for him when Lt. Freebish (Ugo Tognazzi) makes him the chief suspect in the case of The Sarong Killer. Ignore that crack about “So how do you kill a sarong?” With Alan Greenspan and his orchestra.

Only one episode of this unique show was actually aired; but they filmed two dozen of them, and Quokka UTV has got ’em! All of them feature NY Yankees slugger Mickey Mantle trying to describe various Shakespeare plays he never saw, with occasional help from catcher Yogi Berra, who reportedly disliked the show. Mickey’s incredulous reaction to Troilus and Cressida has to be seen to be believed.

Well, that’s that–a small sample of the bliss awaiting you when you tune in to Quokka UTV.