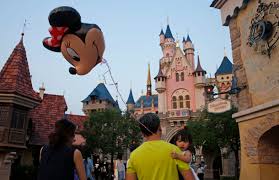 Off with her head!

You know I try not to write up any nooze on the weekend–I even try to avoid reading any–because I need the two days off to recharge my brain and keep my sanity.

But I do want to salute the great state of Florida for giving the arrogant groomers at Disney Corp a good old country smackdown! The day they did it, Disney stock fell 31%. And we heard the glorious news that CNN+ has already been canceled, couldn’t last a month… and maybe the new owners will fire the gang of Far Left schnooks who turned CNN into a doofus factory (not that it was ever anything to write home about).

Anyhow, Disney picked a fight and lost. Knocked out cold in the first round. So you see, timorous quaking Republicans nationwide–it can be done. And it blamed well should be done! If you won’t do it, we’ll find and elect some folks who will.

Meanwhile, hat tip and trumpet fanfare to Gov. DeSantis and the Florida Legislature!

2 comments on “No Nooze This Weekend (Except for This)”