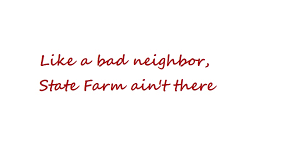 Of course they’re not in when you call them. They’re busy distributing tranny books to 5-year-olds.

Thanks to a massive public backlash, the State Farm Insurance Co. has abandoned its mission to distribute “LGBTQ-themed” books to children as young as five years old, through schools, libraries, and community centers (https://www.washingtonexaminer.com/restoring-america/patriotism-unity/backlash-prompts-state-farm-to-end-program-giving-transgender-books-to-schools).

“We no longer support the program allowing for the distribution of books in schools,” prevaricated a spokescreature for the corporation. Yeahbut, yeahbut! Their “commitment to diversity” remains.

The project, “GenderCool” (oh, God), laughingly tagged a “philanthropic program,” once the public got wind of it, inspired what the corporation called “customer inquiries.” As in “What the holy hell do you moral imbeciles think you’re doing?” Yeahbut, yeahbut! We’re only promoting inclusivity!” Which has what, exactly, to do with selling insurance?

State Farm tried unsuccessfully to deny its role in grooming kids for sex, but a whistleblower leaked State Farm’s Facebook page with a note on it from a school in Tacoma thanking the company for donating all those tranny books.

Let me see if I can explain this so that even some moron of an insurance executive can understand it.

Dude, “diversity” exists everywhere in nature. It does not have to be created, cultivated, or worshiped as an idol. Our DNA makes each and every living thing unique, whether we like it or not. So please stop trying to re-do what God has already done. You’ve only made a putrid mess of it so far.