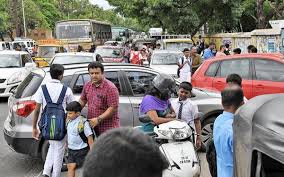 We have a school around the block. I suspect they have a rule against kids walking. Every day at dismissal time, an uncountable multitude of cars descends on the neighborhood, parents picking up their kids so they won’t have to walk a few blocks home. The congestion is indescribable.

What? Are they worried there’s some kind of predator lurking behind every bush? (Well, gee, then, they shouldn’t’ve voted for Democrats, should they?) Are they worried that 200 yards on the sidewalk will make their children lame? Or do they just have pantophobia–“fear of everything”?

So almost no one walks. School busing is colossal big business around here. We lived a mile from the middle school, and I enjoyed walking home with my friends. Sometimes I’d ride my bike.

Well, if we want to raise up a generation whose acute, overriding concern is to be “safe” at all times, who never go outside if they can help it, sit around texting and playing video games for hours on end–if that’s what we’re trying to do, we’re succeeding.