This is Robbie, my little girl who needs an inhaler mask. Patty took her picture and the Old Farmer’s Almanac published it in 2006.

Her sister, Peep, has not had her picture published anywhere. Not yet.

I am happy to say Peep never made a mess like this.

All right, so it ain’t penetrating analysis of current events. It’s just some blog stuff. But it makes a nice change, doesn’t it?

When the phone would ring, and I was unable to answer it, our cat Henry used to find me and meow at me impatiently to make me get up and answer the phone. How did he understand what a telephone was all about?

Our little friend Buster once dressed himself. I happened to look up from my work and there he was, sitting in the front window for everyone to see, having donned a pair of Patty’s undies. Stuck his head through the leg-hole and wore it as a cape.

Another time he was sitting at the window and I said, “Buster, do you see how fat your sister’s getting? She needs some exercise. Why don’t you chase her up the stairs?” Which was exactly what he did, as soon as I suggested it.

His sister, Missie, used to bring me whatever toy she felt like playing with, usually a pipe cleaner, so I could toss it and she could chase it and retrieve it for another throw.

Robbie has asthma, and I have to give her a shot from an inhaler every day. She hates that, and tries very hard to avoid it. And yet she has never held it against me, never cast me as a villain for spraying this stuff up her nose. How can she understand such a thing? I mean, medical treatment was the thing that totally spoiled the relationship I had with my monitor lizard.

Well, cats are smarter than lizards. Robbie’s sister, Peep, is fascinated by gadgets–water cooler (it occasionally burps), fax machine, printer, you name it. She probably knows more about them than I do. 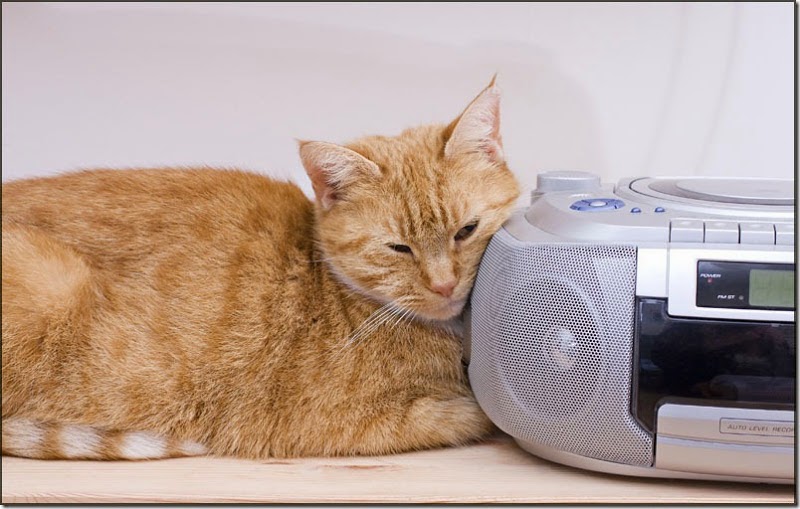 Don’t think it’s all hurly-burly here, all the time.

One of the things I like to do, to relax, is to sing to my cats, Robbie and Peep. You don’t have to be Pavarotti: these cats don’t care.

From the time she was a kitten, Peep favored that old Frankie Valli standby, “Walk like a Peep.” She also likes the theme from the old Patrick McGoohan TV show, “Secret Agent Peep.”

Robbie goes more for the classics: “Furry tales can come true, it can happen to you…” Or, “We were sailing along on Moonlight Bay; you can here the fishes singin’, they seem to say…”

And from Jaws, another cat favorite. You can plug in your own cat’s name and use this song free of charge.

Farewell and adieu to you fair Spanish peepsters,

Farewell and adieu to you Peep-cats of Spain.

For we’ve received orders for to sail back to Peep-town,

And so nevermore shall we peep you again.

Try it with your cat sometime. Or your dog, or your iguana. And feel the love.

If our smartest scientists and our cleverest politicians had had the job of creating the world–a thought engendering almost unimaginable horror–there is a lot they never would have thought of including in it.

Consider some of the extras which God included in His creation, none of which would ever have occurred to any human being.

1. Beauty. Look at a spider web in the grass in the morning, festooned with dew-drops that glisten like pearls, and consider your response to it. Probably you are struck by its beauty. That response is a gift from God. I can’t imagine it having any of that “evolutionary survival value” they’re always going on about in National Geographic specials. Cows while grazing probably see a lot of dewy spider webs. Do you think they appreciate the beauty? Read any nice odes by cows lately?

2. Food and Drink that tastes good and really satisfies. For me it’s fried scallops. How did the Lord ever think of making scallops taste like this? And don’t say it’s the chef, not God: replace the scallops with chunks of pineapple, and there’s nothing the cook can do to make them taste the same. But of course pineapple can be delightful, too.

If humans had been in charge of creation, realizing that you need food to stay alive, they would have created food designed for that purpose. Imagine how blah that would be! Nor would scientists have bothered with the incalculable diversity of taste and color and texture, etc. It would all be this grey gel that keeps us able to fog a mirror–not that I’m trying to give the President’s Wife any more ideas to make school cafeteria food even more unappetizing.

3. Cats and Dogs that love us unconditionally. It doesn’t have Evolutionary Survival Value, so who needs the love of pets? No pug dog ever helped a cave man kill a mammoth, and there’d be no point in even suggesting it to a cat. But he is poor indeed who has never been loved by an animal! Only God–of whom it is written, “God is love”–would have ever thought of that.

God’s world is full of extras that we take for granted. But if we do try to listen to what these say, we begin to understand that they aren’t really extras, after all.

Look. Taste. Love. And listen: there is something here worth hearing.