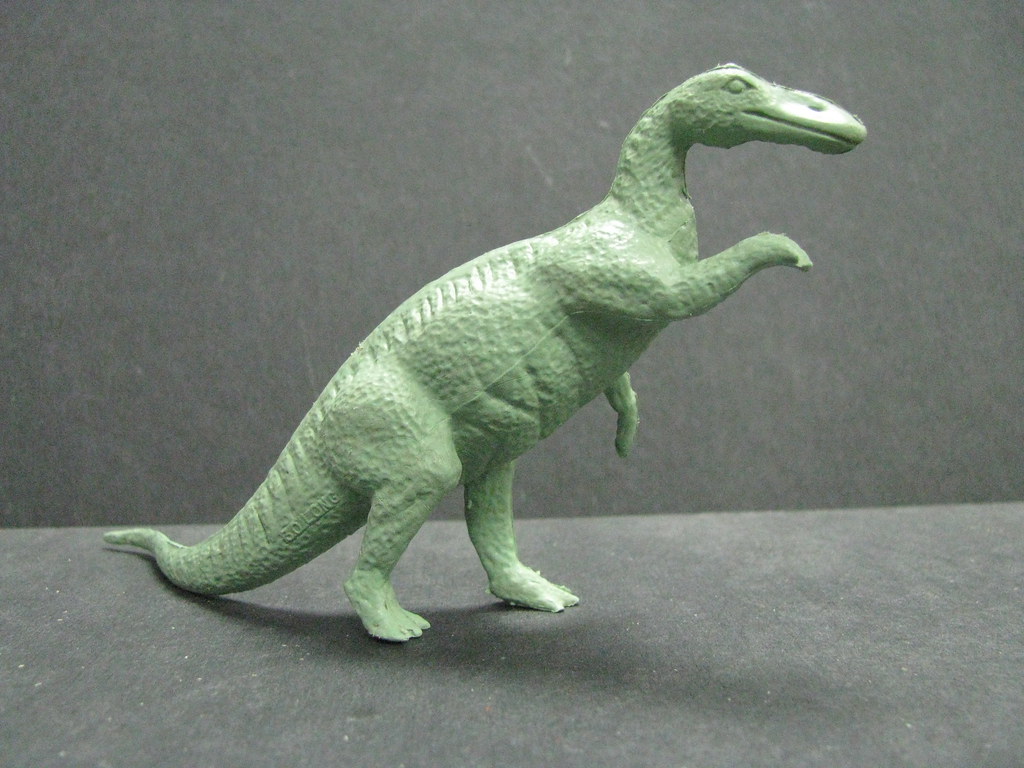 I’m in a retrospective mood today–maybe because 2020 is racing by so fast, even with the Great Quarantine to paralyze it.

Behold the mighty Trachodon, the pre-eminent “duckbill dinosaur,” as faithfully rendered into plastic by the Marx Toy Co. I still have a troop of these in my animal and dinosaur box. Nor was there, when I was acquiring those toys, a dinosaur book that didn’t mention Trachodon.

I don’t wanna hear it, that there never was a Trachodon! I don’t care if all they ever had was a few teeth somebody dug up in 1850–Trachodon was in all the books, I had the toys, I’d even seen the straight-up-standing skeleton in the American Museum of Natural History–and now you want to tell me there was no such thing? Away wi’ ye!

We will never be able to see live dinosaurs, so we will never know just how wrong we were about them. Which icons of today’s Settled Science will follow Trachodon into oblivion?

“I knew him, Horatio: he was a dinosaur of infinite jest. How his broad duck bill would gape with laughter!”

I’d like to know what we’ll be laughing at twenty years from now.

I loved those play sets by the Marx Toy Co.! I didn’t have any of these carry-all cases, but I did have the Cape Kennedy play set when it was still called Cape Canaveral: and boy, those spring-powered rockets! You could actually put a dent in your ceiling. Like, “You’ll shoot your eye out!” But the threat was obvious even to us kids, and nobody shot his eye out with a Nike missile.

These toys set my imagination on fire. For a while there I wanted to be a toy maker when I grew up, so I could design some really far-out play sets. But in the meantime I rejoiced in setting up the little plastic figurines and turning the set-up into a story.

Have they quite succeeded, yet, in putting the imagination into deep freeze? Would kids even know what to do with a play set anymore?

I remain hopeful: just give them time, and they’ll figure it out. Human nature as God created it, good and bad, will not be denied forever.

P.S.–Where did my video go? Can any of you see it?