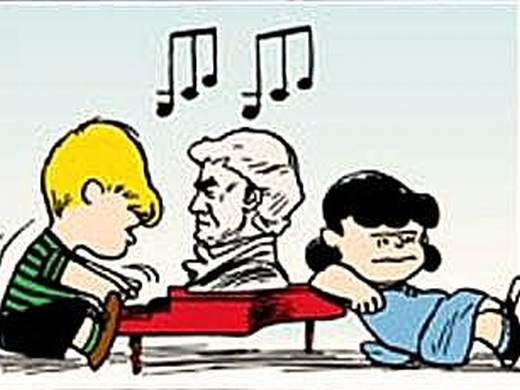 Don’t worry, Ludwig–Schroeder from “Peanuts” will always love you.

How crazy is our current era of history going to get before it simmers–or melts–down?

A German pop singer, born in Tunisia, has called upon the mayor of Vienna to dig up Ludwig Von Beethoven to subject his remains (buried in 1827) to a “racial DNA test” (https://www.classicfm.com/composers/beethoven/roberto-blanco-wants-body-exhumed-racial-dna-test/). Uh, it’s to see if he was really… black.

Well, everything is “race” today, isn’t it? Who’s going to be next on the exhumation parade? When will they get around to insisting that Mozart, Michelangelo, Walt Disney, and Dwight D. Eisenhower were black, too? People are going to have to start getting cremated if they want to be allowed to rest in peace.

Okay–what if it turns out that Beethoven had some African blood in his ancestry? Like, so what? Peter Ustinov is descended from a black emperor of Ethiopia, but he’s never made a big deal of it. Again, so what?

Was Napoleon Chinese? Dig him up and check! Where does it stop? Or we could put the shoe on the other foot: was Louis Armstrong really white? Break out the shovels!

As the late Vince Lombardi would certainly have said, if he was really black, “Ethnicity isn’t everything. It’s the only thing!”

“I really am the fairest one of all! Not a racist bone in my body!”

Stupid liberals. They’re so un-self-aware, they don’t even know they’ve cornered the market on racism.

Let’s Nag Each Other About Racism

In 2015 the lib who owns Starbuck’s Overpriced Coffee wanted his employees to bug customers about “racism.” Libs just can’t get enough of it. This caper drowned in a sea of mockery.

They’re the biggest racists on the block… But of course ignorance is bliss.