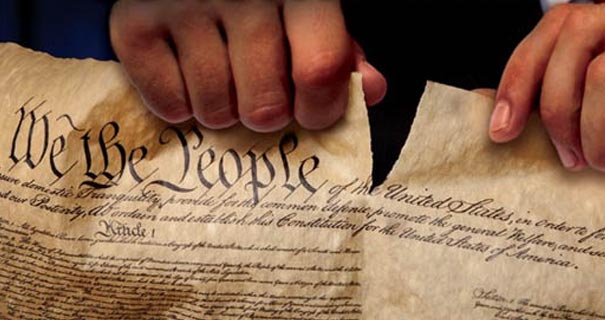 Project Veritas has captured on videotape officials at five fancy-schmancy universities agreeing to tear up copies of the U.S. Constitution with their bare hands or even put it through a paper shredder ( http://www.washingtontimes.com/news/2015/nov/8/yale-cornell-syracuse-vassar-oberlin-administrator/ ).

The five citadels of higher learning are Cornell, Oberlin, Yale, Syracuse, and Vassar.

College officials agreed that the Constitution was “triggering” and “oppressive.”

Uh, what’s that supposed to mean?

“Triggering” means it contains language that some leftist dork might possibly, maybe, conceivably find offensive–that is, any language at all. For instance, “Excuse me, what time is it?” might be found offensive by a member of any one of several Cherished Minorities. Might be “oppressive,” too.

It’d be fun to call these self-anointed sages out and demand they tell us what they’d like to replace the Constitution with. Those answers might be worth hearing.

Meanwhile, folks–hey, it’s your tuition dollars that pay these creeps.