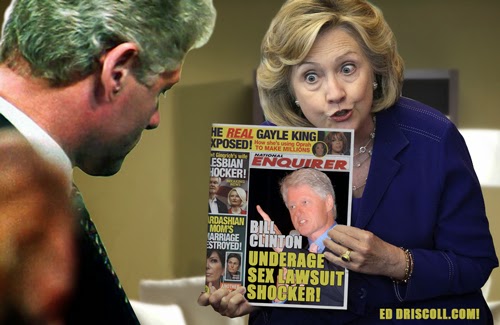 If you like your hypocrisy served up in big, fat, dripping slabs, you’d have had a feast at this year’s Democrat Convention.

As evidence of how deranged and clueless these people are, consider TV celeb Lena Dunham’s speech the other night. Bear in mind that Ms. Dunham made a false accusation of rape that she had to take back and has admitted to molesting her little sister. All and all, perfect for an audience of Democrats. ( http://www.breitbart.com/big-hollywood/2016/07/26/rape-hoaxer-lena-dunham-dnc-hillary-will-help-fellow-sexual-assault-survivors/ )

Ms. Dunham spoke of herself as a victim of sexual assault–that’s the rape that never happened–and hailed Hillary Clinton as the great supporter and champion of “my fellow sexual assault survivors.”

Yay, hooray. Did she not know that sitting right there in the audience was Bill Clinton, Mr. Hillary, the king of sexual harassment and assault? If the pagans had a god of sexual harassment, it’d be him. Did she not know–and how in the world couldn’t she?–that Hillary Clinton directed the campaign to smear, discredit, and malign her husband’s victims?

This is hypocrisy of a very high order. Or maybe it’s just insanity. But describing Hillary “Careless” Clinton as a protector of women who have suffered sexual assault is like calling a stork the protector of the minnows.

Oh, and of course Ms. Dunham hailed Careless as the guarantor of “the American promise”–the American Dream is over, so now we have to settle for a promise–which she defined as not “transphobia, Islamophobia, xenophobia, and systemic racism.”

Do you really, truly want these people running your government? Will your conscience let you live with that?

We have finally gone beyond just plain wacko politics, and entered a realm of monsters.

4 comments on “Are These People for Real?”