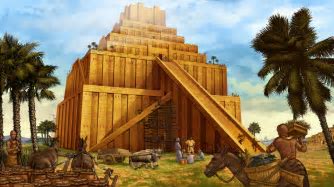 My wife watched a documentary on youtube yesterday, nicely produced, forcefully argued, about the building of the Tower of Babel (Genesis 11:1-9), and purporting to offer “proof” that the Bible narrative is historically accurate.

Only problem was, the documentary was all wet. They just went on and on about buildings erected by Nebuchadnezzar in Babylon thousands of years after the Tower of Babel, with apparently no awareness that they were conflating two totally unrelated stories. Not even a suspicion of it.

I would guess this film cost a lot of money to produce and involved a lot of people in the production. Did nobody know anything at all about the Bible? Did it never occur to anyone involved to at least read the relevant chapters of the Bible before launching into this festival of ignorance? Did nobody ever speak up and say, “Uh, guys, these are two different stories we’re talking about here–and they’re thousands of years apart”?

Well, you know what they say about the Internet as a source of information–sometimes it can be great, but there is no quality control.

Just to make things worse, all the comments following the film pointed out the yawning chasm of error into which it had fallen. Apparently every person who saw it knew the Bible better than the filmmakers. I think we can be thankful for that!

It just makes you wonder why anybody would ever go to the trouble of producing a documentary when they had no idea what they were talking about. Not even the feeblest effort was made to get at the facts. I don’t think the filmmakers even guessed they were dealing in sheer ignorance.

How much else of what we see is pure twaddle?

4 comments on “Babbling about Babel”