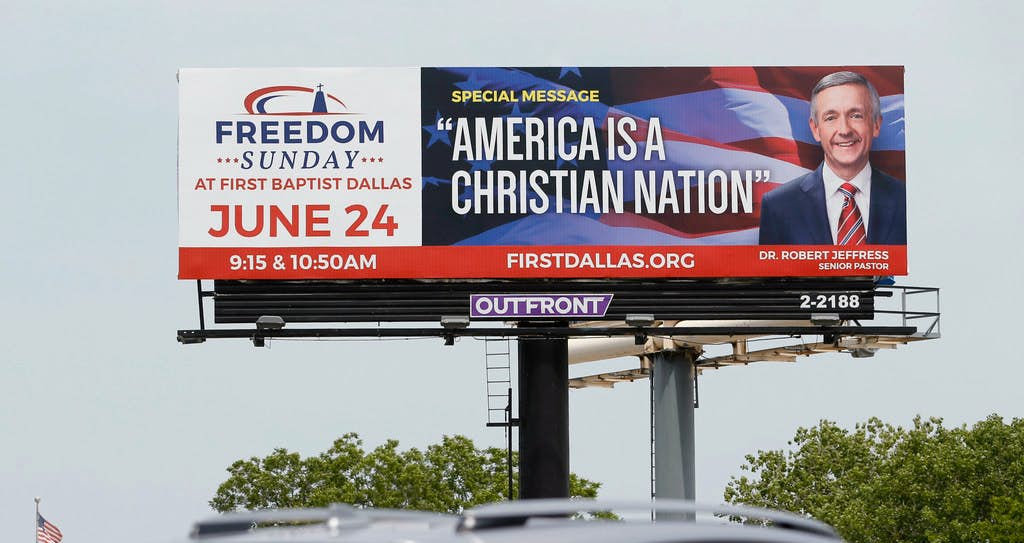 After protests by the mayor of Dallas, the Dallas Moaning News, and a bunch of atheists, a billboard reading “America is a Christian Nation” has been taken down (https://www.washingtontimes.com/news/2018/jun/18/america-christian-nation-billboard-removed-dallas/).

Because, you see, the message is “divisive” and “exclusionary” and “a myth.”

If America is not a Christian nation, that’s a tragedy.

American Christians once upon a time created a nation, then unique in the world, allowing the free exercise of religion–any religion. The First Amendment guaranteed it. It goes to show you should never expect gratitude.

The billboard was paid for by the First Baptist Church in Dallas. Now atheists plan to gather in front of the church and hold a protest. Just in case anybody comes out whistling a hymn or something.

Remember that Democrat slogan from 2016? “The government is the only thing we all belong to.” They meant it literally. That’s their religion: the state is their god.

O Lord our God, when you judge this nation, please remember that these things are done without our consent, against our will, and over our objections. In Jesus’ name, Amen.

13 comments on “‘Christian Nation’ Billboard: Down”