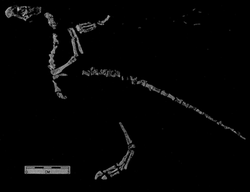 That fragmentary skeleton up there is all that remains of a creature which its discoverer says is the oldest known bird–so old, that birds couldn’t possibly have evolved from dinosaurs. This makes him a bad guy and his science “problematic.”

Mr. Nature here, on this extremely humid Fourth of July, along with the “Triassic bird,” Protoavis. Dr. Sankar Chatterjee was a good guy when he was just digging up dinosaurs and thecodonts in the Southwest: but if Protoavis really is a bird, like he says it is, and if it really lived alongside early dinosaurs in the Triassic Period, like he says it did, then a whole lot of pet scientific paradigms and just-so stories have to go down the drain–and scientists hate it when that happens.

As some of you know, I’m a radical agnostic about the age of the earth. Can’t help it: the Bible doesn’t say how long Adam and Eve were in the Garden before they sinned and got expelled, and were made subject to mortality. I suspect it was a very long time indeed.

But one thing’s sure: Protoavis has no business turning up in the Triassic fossil record, it’s unforgivably rude, and Dr. Chatterjee ought to be ashamed of himself. Why, he’ll be doing Climbit Change Denial next!

That funny little sound you hear in the background is Protoavis snickering.

5 comments on “The Oldest Bird?”