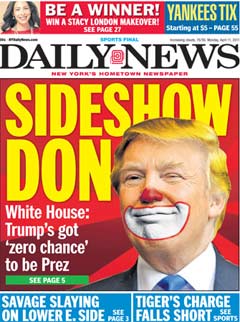 “Objective news reporting,” according to our media

The Boston Globe–how many people still read it?–has called for a coordinated attack on the president of the United States by all of America’s newspapers (https://www.yahoo.com/news/newspaper-calls-war-words-against-193505874.html).

I thought they were already doing that.

They say they’ve got 70, er, newspapers already lined up for an editorial jihad on August 16. They’re mad because President Trump has called out the media for printing fake news. What–y’mean they don’t?

I’ve never in my life seen the nooze media wage war on anyone like they have on this president. They never rest. And it’s not just the papers; it’s all the talking heads on TV, plus Hollywood, plus our collidges and looniversities–it’s all anti-Trump, 24/7/365.

What do you suppose would have happened if even one conservative news source–presuming you could find one–had called for a coordinated editorial attack on President *Batteries Not Included? Racist, racist! Biggit! Hater! Nazi! And so on.

While normal people went peacefully about their business, leftists took control of many of our country’s institutions–the nooze media, “entertainment,” “education,” banks and other business corporations, and even our professional sports leagues. They were going to ram Hillary down our throats so she could finish the “fundamental transformation” that Obama started. They were going to wind up as the absolute rulers of Venezuela North.

They thought they had it in the bag. They were so close to their objective, they could taste it.

And then those pesky American voters snatched it away from them.

They can’t live with that, and they don’t intend to. They’ll overturn that election no matter what it costs.

And that’s why we don’t love them anymore.

11 comments on “Newspaper Calls for ‘Coordinated Attack’ on Trump”