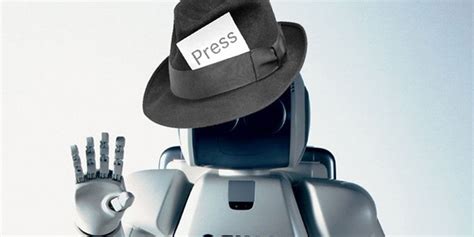 Wait a minute! Don’t we already have robot reporters that look like people? Sure we do! That’s how they all wind up saying the same thing every night: it’s their programming. “[Problem whatever] is Donald Trump’s fault!” “It’s racism!” “Also that other thing is racism!” “Government has the answers!” “Global Warming causes cold weather!” And on and on and on they go.

Bloomberg News, says the Times article, uses a computer that can swiftly “analyze a financial report and spit out an immediate news story.” Superfluous–they already have human reporters that can spit out news stories. No one cares whether they’re true, as long as they’re all saying the same thing. Other nooze outlets use the robots to spit out sports stories.

I used to rewrite local sports when I was a newspaperman. It was boring! We did it because those stories had value for our readers–like when your kid has a big day in soccer. You clip out the article and put it in your scrapbook. It was rote work to us, but rather special to the readers: so we did it.

And now I’ve got to get out of here and write a Newswithviews column!