Westerns were big, big, big! on TV while I was growing up. But toward the end of the 1950s, the studios decided we needed Westerns that offered something more than just cowboys riding around shooting people. We needed some adult Westerns with meat on their bones. And psychology. Lots of psychology.

Lawman, for one, aired on Sunday night after my bedtime. But I could always hear the theme song coming on, and then my brother and I would get out of bed–we had a room upstairs–and creep toward the hall door. If we opened it a crack, careful not to make any noise, we could peer through that crack all the way downstairs–right down to the TV screen. And we watched as much of Lawman as we could before conking out and crawling back to our beds.

I was not an adult, but I liked those adult Westerns. The ones by Warner Bros. always had great theme songs. “Cheyenne, Cheyenne, when will you be happening by…” “Sugarfoot, Sugarfoot, easy-lopin’, cattle-ropin’ Sugarfoot…” And they were still shooting bad guys, instead of just letting them take over our society and screwing it up.

Besides which, the set decorator for Lawman was–of all people–William Wallace! “Braveheart”! How cool was that? 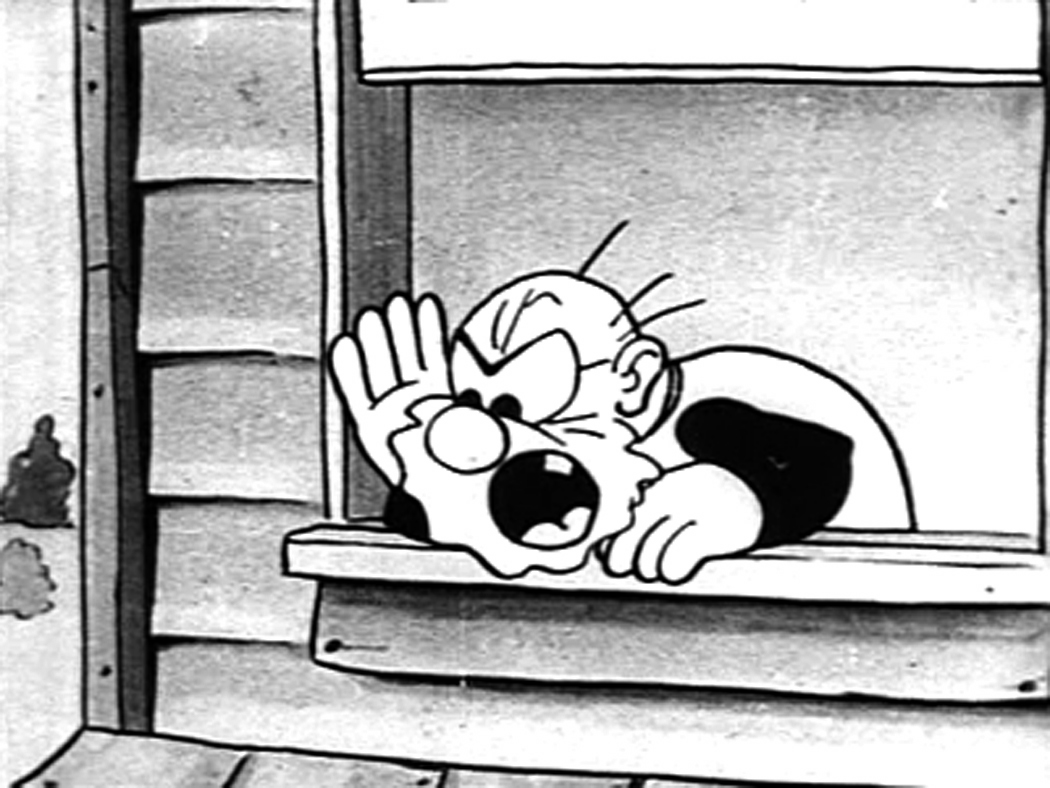 Growing up with 1950s TV, I must have seen this a thousand times in ancient Paul Terry cartoons–assorted mice, cats, and humans safely jumping off rooftops with an umbrella for a parachute.

All over the world, kids got hurt trying to duplicate this feat. Jump out the fifth-story window? Sure, no problem–I’ve got an umbrella!

These were really old cartoons, with captions instead of speech. Like silent movies. Actually, all these decades later (some of them are a hundred years old), they’re still pretty funny.

But kids will try to do what they see characters do in cartoons–so do your best to make them understand why they shouldn’t. (“Experience is the best teacher, but the fees are very high.” Especially when you jump out the window.) 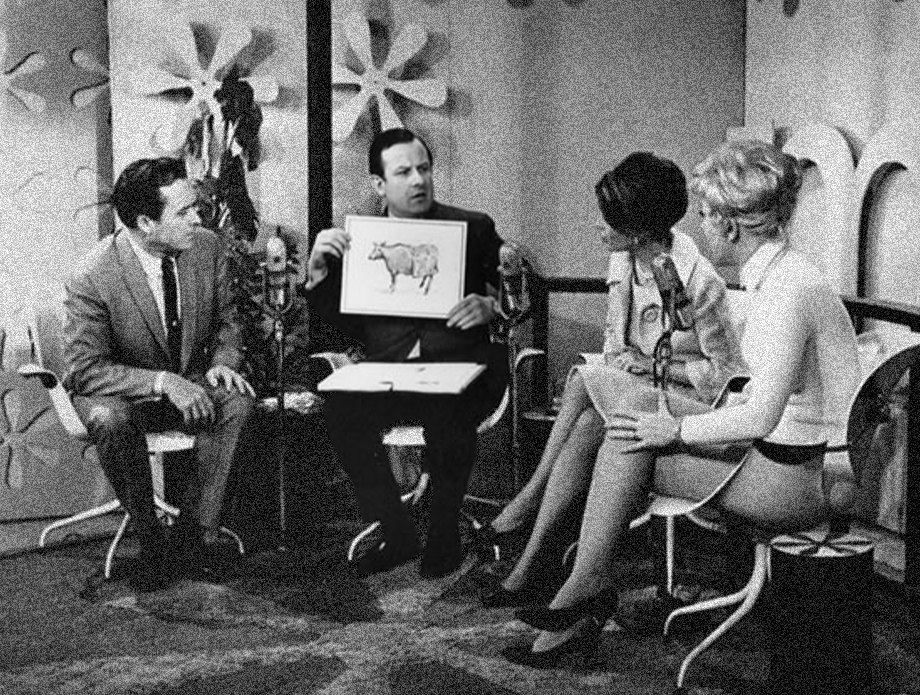 In 1959 a kooky character called “G. Clifford Prout” appeared on the Today Show to launch his “Clothe the Animals” campaign (https://priceonomics.com/the-hoaxster-who-revealed-sad-truths-about-america/).

It was a hoax engineered by an inveterate hoaxster, Alan Abel. Nevertheless, some 50,000 Americans signed up to support his phony campaign.

What does that tell us about our national credulity quotient? Or did a lot of those people sign up just to be part of the gag?

At any rate, we had some laughs about it on the playground.

I’m afraid our populace has grown a bit more daft since then.

This takes us a long way down Memory Lane. These days it’s hard to imagine that a little series built around a clown, a dragon, and a cheery young woman would turn into a major hit. Indeed, in 2009 the U.S. Postal Service issued a commemorative stamp honoring Kukla, Frank, and Ollie.

Kukla the clown and Ollie the dragon, puppets, engaged in gentle banter and funny songs with Fran Allison, the only live human in the show–and people just plain loved it. The show ran from 1947 through 1957. Watching it is one of my earliest childhood memories. But it was even more popular among adults than children.

And would you believe it was all ad-libbed? No foolin’. Fran had experience as a live radio comedian, so she was up to the challenge. I wonder if anybody could successfully do a show like that today.

I never saw Peter Gunn because it was 1958, I was nine years old, and my folks sent me to bed well before the show came on. But the sounds of television used to filter up the stairs to my bedroom, and there was just no way I was going to sleep through Henry Mancini’s Peter Gunn theme music. If this was not one of the all-time great TV themes, I don’t know what was.

I was usually still awake anyway, reading Uncle Scrooge, Mickey Mouse, and Archie comics by flashlight–and the light went kind of orangey as the battery ran down. Not good for my eyes.

I heard a lot of great theme music in those days. And Mancini was the greatest of them all.

I was nine years old in 1958, and I have a vivid memory of lying awake in bed, listening intently as my parents, downstairs, watched Jefferson Drum.

This TV Western–and there were dozens of them, in those days–had theme music like none other’s. It was a grim, stately drum solo. I fully expected to find it preserved somewhere on the Internet so I could play it for you. Lying up there in the dark, that theme used to thrill me. Frankly, I don’t see how the show could ever have lived up to that theme music.

But, alas, I can find no trace of the Jefferson Drum theme. It is as if it had never existed–a fate that has overtaken many things and places of my childhood. Village of Bonhamtown, gone without a trace. Oppenheim’s estate, utterly erased. Lived here all my life and I can barely find my way around.

For the record, Jefferson Drum (played by Jeff Richards) was a crusading newspaperman in the Old West, before “journalists” turned into organ grinders’ monkeys for the Democrat Party. The show only lasted one season; but I can still hear that drum solo in my mind. I wonder if anybody else remembers it. Was there really any such thing, or did I dream it?

I am aware that roller derby still exists; that indeed it has staged a sort of comeback worldwide, albeit mostly at an amateur level.

Roller Derby and TV grew up together. The first roller derby broadcast was in 1948. It blossomed into a huge hit and a cultural phenomenon. This is hard to explain. The clip will give you some idea of the sublime awfulness of 1950s roller derby. I think the hook was the display of “un-ladylike behavior” at a time when women were expected to be “ladies.” Please don’t ask me to define those terms. I’m just sayin’ I think the contrast was a big selling point for roller derby.

At a friend’s house, his mother and aunt watched roller derby every chance they got, well into the Sixties (even though it had already faded severely and was going quickly out of style). No matter how many times I was exposed to it, the rules of roller derby remained a mystery to me; nor was I ever able to perceive the object of the game. It just looked like a lot of bodies flying around, plus some fisticuffs.

TV survived, but roller derby shrank almost into oblivion–I think because oafish, churlish behavior has become practically an expectation for both men and women. Roller derby can’t compete with an Antifa riot.

For ugliness to have any value, there has to be beauty present, too.

Was this a hit when I was eight years old, or what? Walt Disney’s Zorro–and you can bet there was a whole lot of swordfightin’ goin’ on in our neighborhood!

Now hardly anybody had color TV back then, but we knew from Zorro bubblegum cards that the show was filmed in color. And of course Zorro had a lot of adventures at night, wearing a black mask and cape and riding a black horse–so how much color did you need?

This show generated pulse-pounding excitement among us kids. I don’t think TV shows can generate that kind of excitement anymore. Maybe because there are so many of them. Maybe because Walt Disney’s dead and the company he founded has gone over to the dark side.

Anyhow, Zorro was way cool–and so was his alter ego, Don Diego–and we all wanted to grow up to be like him. And how was that bad?

If you grew up in the 1950s, you very likely saw these silent cartoons, created by Paul Terry, on your black-and-white TV. If you’d enjoy that particular stroll down Memory Lane, Youtube has several of them available.

Y’know what? These are really funny! Primitive in technique, but well-advanced in crackpot humor.

Most of the commenters, myself included, would have liked to know more about the cartoons’ music tracks. I don’t think most of the music that’s been plugged into this example is original. Somehow that got lost. But considering that some of these are more than 70 years old, we probably have to take what we can get.

Hey, it’s Labor Day, a holiday, so let’s have a few harmless laughs.

This always cheers me up–genuine 2nd Amendment TV, vintage 1958: The Rifleman, starring Chuck Connors. Liberals really hate this! Like, imagine this guy showing up at some college campus. Run for the Play-Doh!

See if you can count the shots.