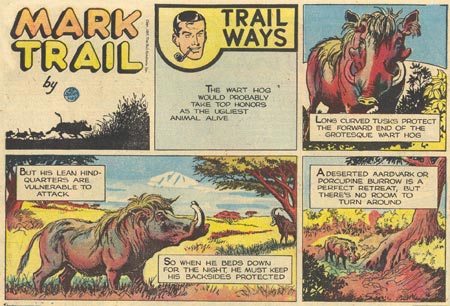 It’s 1957 again, early Sunday afternoon. I’ve already been to Sunday school, we’ve had our Sunday dinner. Usually on Sunday we visit someone else in the family, or someone visits us; but not today. It’s raining, too early in the year for any baseball on TV, and everything has sort of wound down for a little while: a Sabbath rest.

As for me, it’s time to revel in the Sunday color comics. Prince Valiant. Mandrake the Magician. Flash Gordon. Blondie. Freckles and His Friends. Bugs Bunny. Oh, so many of them! An eight-year-old could spend half the afternoon, doing this. And of course my favorite, Mark Trail.

I didn’t care much for the black-and-white Mark Trail stories on the weekdays, I didn’t understand them, but on Sunday it was goodbye to all that, it was color, and it was one cool animal after another. I didn’t care if I was the only kid on the block who knew about wart hogs, four-eyed fish, and bolas spiders. This was stuff worth knowing! Today I call it God’s stuff. Creation. Back then it was just wonderful, I didn’t have a word for it.

It’s been decades since I’ve had a Sunday newspaper, so I have no idea if any of those old comic strips have been continued. If Mark Trail’s still there, betcha anything they took away his pipe.

But at least he’ll never run out of animals; and neither will we. God never skimped on His Creation.