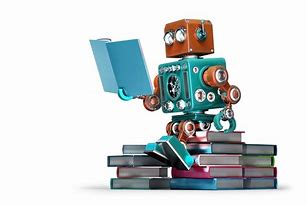 But actually The Guardian article is quite critical. What the computers doing this work are, says the report, are “giant automated plagiarism machines” which regurgitate themes and expressions boiled down from thousands of articles and stories written by humans. It should be called Artificial Stupidity. You can see that when it’s given the opening line of a classic novel by, for example, George Orwell or Jane Austen, and then goes on to tack onto it a lot of half-baked twaddle. I wonder how they’d continue A Tale of Two Cities after Charles Dickens’ immortal opening words, “It was the best of times, it was the worst of times…” Click the link above to see just how badly they fail. Violet Crepuscular could do better.

But journalism! Now we’re getting somewhere. They’re already robots–why pay them, when you can replace them? Whatever the news item they’re writing about, all they have to do is attack Donald Trump, say it’s all his fault, and throw in a few words about racism and gender identity. And presto, you’ve got journalism.

Robots can’t write classic novels, but they can do modern journalism.