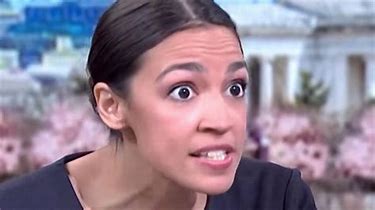 Just weeks ago, she was in the nooze a dozen times a day: you couldn’t miss her if you tried to. It would’ve been an impressive trick just to avoid her for a single day.

The shelf life of a Democrat rock star can be unexpectedly short.

“Mother” Sheehan–remember her?–was a media idol , on the air all the time… until she nipped at Rahm Emmanuel’s ankle when he was the Clinton chief of staff. And then she disappeared. Just like a puff of smoke in the wind.

David Hogg, the foul-mouthed teenage mahdi of the gun-grab crowd, cursed out the “old” Democrat establishment just once too often. He’s gone, too.

Why should they have wanted weird Alexandria to disappear? Well, she bit Speaker Nancy Pelosi and Senator Dianne Feinstein, and her Green New Deal–released before they could camoflage the wretched thing–grossly embarrassed the party, turned into a laughing-stock: and trust me, The Smartest People In The World don’t like it when the peasants laugh at them.

Probably the last thing the Mask of Sanity Democrats want is for kooks like Ocasio-Cortez to be dropping clangers all over the 2020 presidential campaign (as if Joe Biden needed any help with that!). They’ll recruit someone to run against her, and fund that person lavishly. Meanwhile, she has been amputated from the nooze.

I have come to believe that the heads of America’s nooze media literally get their marching orders from Democrat Party commissars. That’s why you can tune in half a dozen different nooze shows and hear the noozies all saying the same thing at the same time. Remember when suddenly they were all talking so solemnly about “gravitas”? Go ahead, tell me I’m wrong.

The Democrats raise these people up and just as abruptly cast them down when they get out of line. There is more than a superficial resemblance to the old Soviet Union.

Every decent person who is not crazy has a duty to help stop them in 2020.