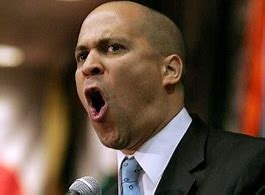 Is it really possible you can be elected president just by screaming “Racism!” a thousand times a day?

Well, Russian Collusion fell flat on its face, so Democrats have moved on to Plan B–Everything is Racist.

One of 25 idiots seeking the 2020 Democrat presidential nomination, Corey “I’m Spartacus” Booker–who last week was bragging about his manly urge to physically assault the president–now wants President Donald Trump to cancel his rallies–because, of course, people who aren’t liberals getting together to cheer their candidate are “a breeding ground for racism and bigotry that inspire attacks like the one in El Paso” (https://www.nj.com/politics/2019/08/trump-rallies-a-breeding-ground-for-racism-and-bigotry-booker-campaign-says.html).

Whew! We’re not only Racists, for failing to vote Democrat. We’re also to blame for some nut popping his cork and embarking on a murder spree.

I wonder how many people would come to a Corey Booker rally.

[Note: This was some of the nooze I just couldn’t bring myself to report yesterday. I can hardly wait for it to be Tanystropheus time again.]