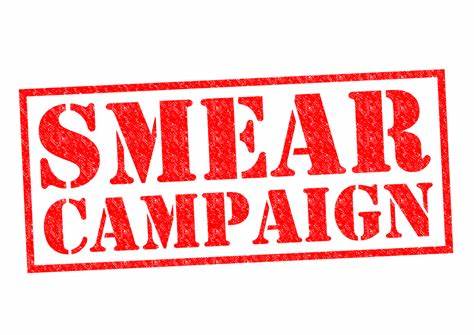 I want to write about a smear campaign, but I don’t want to say who’s being smeared or what particular lies are being told about this person. For one thing, it’s a sin to repeat stuff like that. For another–it’s what the smear artists want us to do. Because even if we’re tearing into them and their lies, it’s giving them more publicity–more people who just might wind up believing them.

But something has to be said. Do you see the kind of America the Far Left Crazy is trying to build? This is Democrats at work, with their toadies in the nooze media. They want to cage us in an America where they can destroy anyone, instantly, with unsubstantiated lies: anyone who poses any kind of obstacle to any of their plans.

They want the lie to stick to you even if it’s been exposed as a lie; their tame noozies will see that it does. Sort of like those “racist” labels they stick on four-year-olds in British schools: you’re stuck with it forever.

And it can be any kind of lie they want. The object is not to prove it, but simply to create it and glue it onto the victim’s name. Noozies will then repeat it every time the victim’s name comes up. Eventually some people, maybe a lot of people, will forget it was a lie.

Democrats are refining this into an exact science.

If America can survive as a free republic, under so much attack from within, that will be proof that God is watching over us.

10 comments on “Pardon My Circumlocution”