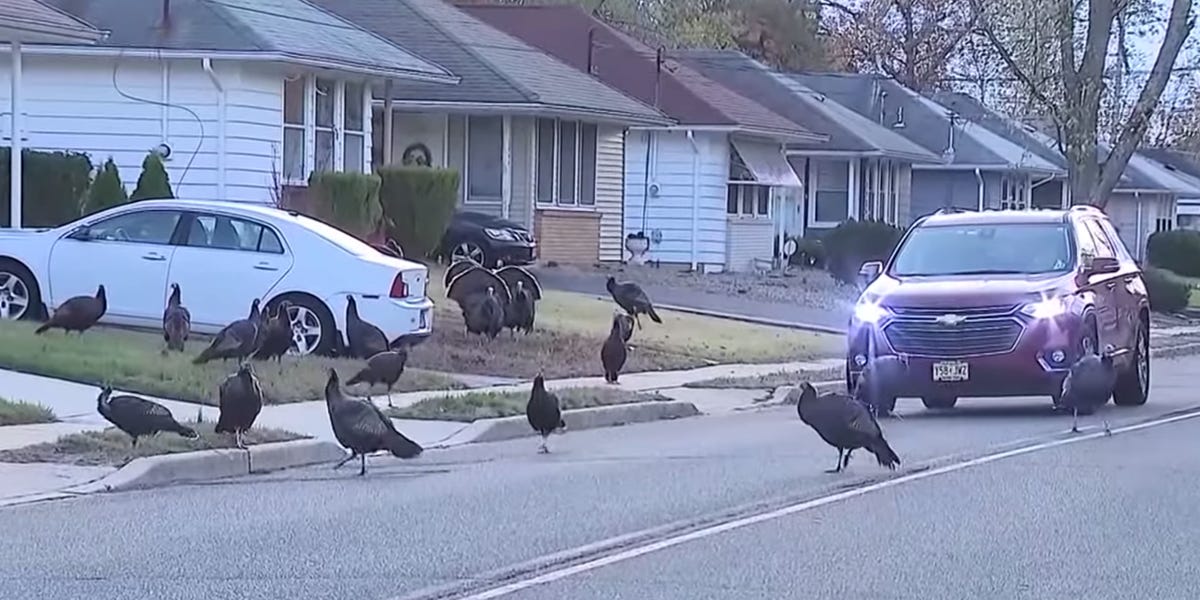 Did I read that right–the town of Tom River, NJ (where my sister lives), is being “terrorized” by… wild turkeys? (https://www.insider.com/wild-turkeys-terrorizing-toms-river-new-jersey-2019-11).

It could be a 1950s horror movie: Attack of the Wild Turkeys. “See the turkeys take revenge for all those Thanksgiving dinners! See it if you dare!” See them–according to nooze reports–pecking roofs, breaking windows on cars, and “attacking residents.” A former major league baseball player went so far as to tweet the governor, pleading for the state to rescue the beleaguered township: “They trashed my yard!” he laments.

It’s supposedly a “gang”–do turkeys have gangs?–of 40 to 60 birds. Their favorite target, we are told, is the 55-and-over community called Holiday City. Do the turkeys know it’s called that? No wonder they’re on the warpath.

Having lived in the suburbs all my life, I don’t know much about wild turkeys. I do know you can’t shoot them in New Jersey. Not that it would be a good idea for a lot of residents to cut loose with the lead. The houses are way too close together for that.

Some of you who grew up in the country, what do you say? Are turkeys dangerous to humans? Has anyone ever been killed and eaten by turkeys? Did the turkeys want succotash and cranberry sauce with that?

Well, the earth is the Lord’s (Ps. 24), not ours: we just live on it. A few years ago, one day, we had some wild turkeys in our neighborhood. They strolled across the street to St. Francis Cathedral and stood around by the Christmas creche. They looked like they belonged there.

Can we say the same?

18 comments on “Town ‘Terrorized’… by Turkeys?”