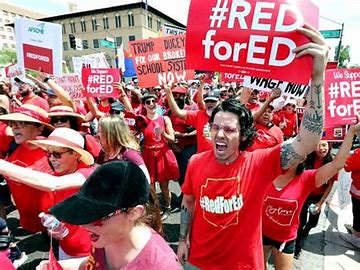 Why do we let these people teach our children?

Teachers’ unions are the backbone of Far Left Crazy in America, pouring millions of dollars and tens of thousands of unpaid “volunteers” into Democrat political campaigns every year.

But thanks to a 2018 Supreme Court ruling, this could change. The court ruled that a teacher does not have to join the union or pay union dues as a condition of employment. Yowch!

Oregon’s two teachers’ unions, since the ruling, have lost 35% and 36% of their members, and each has lost close to $1 million in revenue (https://www.breitbart.com/politics/2019/11/13/teachers-unions-see-drops-in-membership-and-revenue/).

Unions have been trying to find ways around complying with the ruling; and as yet, most teachers are unaware that they have been given their freedom. A lot of them are only in the unions because they do not know they do not have to be! Once upon a time you could leave the union, but you’d still have to pay union dues even though you were not a member anymore. The Supreme Court’s ruling has abolished that requirement.

I can’t think of anything that would benefit America more than the collapse of teacher unions–unless it would be the collapse of “public education” altogether. Did we or did we not just find out that the teachers’ union in Chicago recently sent delegations to Venezuela to “study” socialism and sing the praises of the Maduro dictatorship? Why should the American people have to pay for that? Why should we have to let these left-wing loons “teach” our children to be as daft as they themselves are?

It is unjust and intolerable that taxpayers have to fund these schools but have no say as to who teaches in them, or what is taught. If we pay for something, we should own it! “Public education” has stood that on its head.

Teachers, wake up! The court has stricken off your chains.

9 comments on “Some Good News, for a Change”