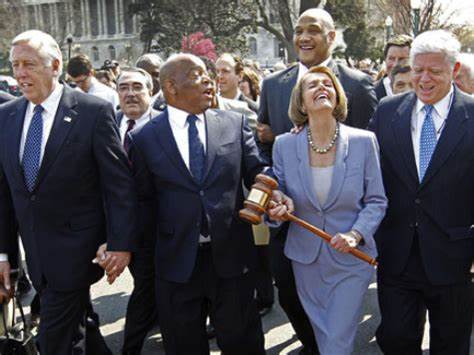 Nobody excels at the arrogant fat-headed gesture like Squeaker of the House Nancy Pelosi. Remember her parading in triumph down Pennsylvania Avenue (above), after she and her fellow Democrats pulled every dirty trick in the book to ram Obamacare down America’s throat? We’re still choking on it. A triumph not over any foreign foe, but over America.

She was at it again yesterday, handing out pens as “impeachment” souvenirs. They had everything but party hats and noisemakers.

All a president has to do anymore to get impeached is beat a Democrat in the election. That translates to “abuse of power.” Then there’s “obstruction of Congress.” A president who didn’t obstruct Congress would not be doing his duty, but never mind–Donald Trump “obstructed” a Democrat Congress. I’m sure you see the difference.

In 2018 we let the Democrats capture the House of Reprehensibles, and they’ve done nothing but mischief ever since.

Nancy Pelosi wants to make sure she has a place in history.

I think she has.

11 comments on “Ruled by Pelosi: a Tragicomedy”