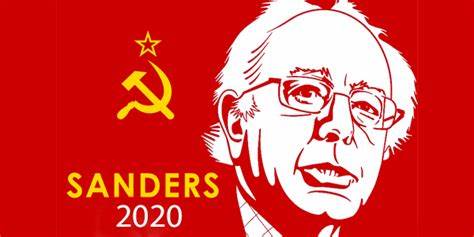 Despite calls from Party higher-ups to cancel the rest of the Democrat primary and declare Joe Biden the winner, the first Biden-Bernie Sanders debate is still on for Sunday.

This is fraught with danger: the two candidates might just destroy each other. I would expect the Party to counsel both of them not to attack each other and spend the whole evening bashing President Trump.

Ah! But Bernie the socialist is way behind and has only one thing left to sell: his power to damage Biden. They’ll have to buy him off somehow or he’ll keep on doing it. Even so, he has to walk a fine line. If he destroys Biden in the first debate, then he’ll have nothing left to sell.

The Party’s also afraid of what Bernie might say, because he has a lot of far-out Far Left wackos working for him. A paid Sanders campaign staffer in South Carolina was caught by Project Veritas cooing sweet nothings like “Guillotine the rich!”, send all Republicans to “re-education camps,” and “I’m ready to start tearing bricks up and start fighting… I’m ready for the f***ing revolution, bro!” (https://m.washingtontimes.com/news/2020/jan/21/guillotine-rich-project-veritas-exposes-another-ra/?fbclid=IwAR0K0FkaAk9wsewuABGOTVTbAWGJPaRQttAK_GGEZEnQNYPyUOb4HqobdPY).

He also wants to “disband” the legislative and judicial branches of the government. All we really need, he thinks, is a dictator.

Question! “Senator Sanders, if you don’t agree with these violent sentiments, then why do you have nuts like this running your campaign?” Not that any left-wing noozie “moderator” would ever ask it.

They’ll also have to worry about Biden’s increasingly frequent mental lapses, and his increasingly hair-trigger temper. It won’t be hard for Sanders to provoke him to say intemperate things and damage himself.

This is a campaign in which the Party has to hide its candidates. As long as the public can’t see or hear them, they’ve got a shot.

If the debates prove to be a disaster, what then? What happens at the convention? Do they take Hillary Clinton out of mothballs and bestow the presidential nomination on her–a candidate for whom no one voted in the primary? Is that their version of, ahem, “democracy”? Gotta love it.

Maybe in such a debate, the less said by either candidate, the better. The Party does not want to wind up with something like this.

3 comments on “Will Dems’ Debate Explode in Their Faces?”