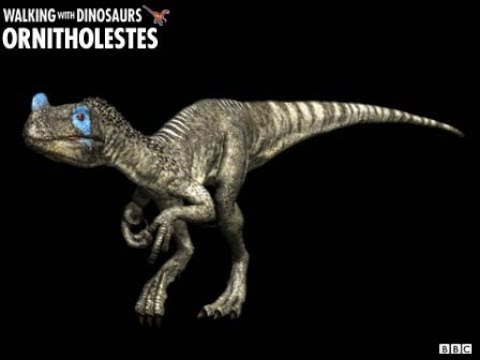 One of these days I’m going to want to bring a dinosaur or two into the fantasy world of my Bell Mountain novels.

Ornitholestes was the most famous small dinosaur when I was a boy–and by famous I mean in all the books, on all the posters, toys and museum souvenirs: if you were at all interested in dinosaurs, you knew Ornitholestes (the name means “bird hunter”)–probably from this famous drawing by Charles R. Knight, found in just about every children’s book on dinosaurs. 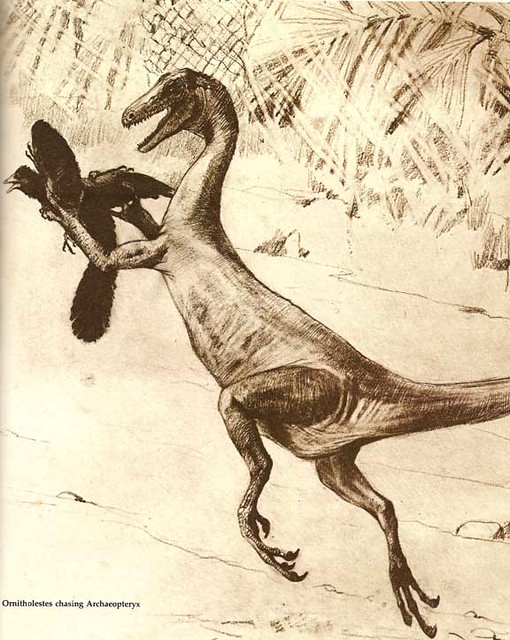 See? There he is, catching a prehistoric bird.

The fame of this creature rests upon a single fossil, consisting of a damaged skull and some bits of the skeleton–to this day, the only fossil of Ornitholestes yet discovered.

By the time the popular documentary, Walking with Dinosaurs, came out in 1999, Ornitholestes–it really needs a shorter name; how about “Bob”?–had been jazzed up a lot. Now Bob had a kind of crest on his nose–very sporty. Looks great in a movie. But after only a few years they decided Bob’s flashy nose crest was really only a piece of the skull that had gotten knocked loose, so now he’s back to where he was when Charles R. Knight drew him in the 1930s. Only some artists like to give him feathers. No feathers have been found, there’s only one fossil, oh, well…

In spite of all the confusion, I find it easy to imagine this critter darting in and out of the undergrowth in Lintum Forest—–Wait a minute! Hold the phone! Did I just get the faint whiff of an opening scene for Bell Mountain No. 14? You know what? I think I did!

I think the Lord has just given me a birthday present. And this is not the first time that’s happened. Thank you, Father! This is just so cool!