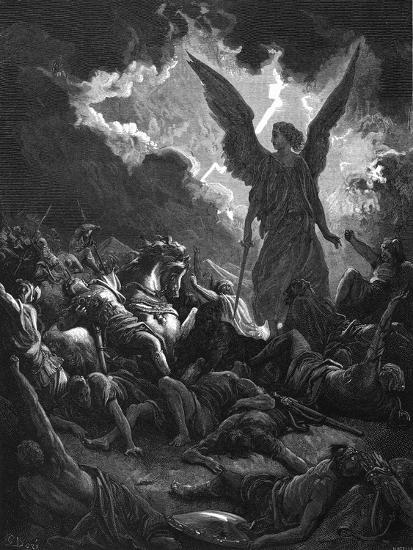 In the fourteenth year of King Hezekiah, Sennacherib the king of Assyria invaded Judah with his army–an army that had conquered everyone who had ever dared to stand against it. The history is told in the Bible, in three places–2 Kings 18 and 19, 2 Chronicles 32, and Isaiah 36 and 37.

God said He would fight for Jerusalem and send the Assyrians back the way they came. As for the army,

“And it came to pass that night, that the angel of the Lord went out, and smote in the camp of the Assyrians an hundred fourscore and five thousand (185,000): and when they arose early in the morning, behold, they were all dead corpses” (2 Kings 19:35). And after Sennacherib returned to Assyria, two of his sons assassinated him.

But before the smiting, Sennacherib sent one of his servants to Jerusalem to demand its surrender–and to mock Hezekiah for trusting in God. This fool, Rabshakeh, equated God Almighty with the imaginary little false gods of the pagan cities and nations, which could not protect their people from Assyria.

Today the Far Left has seized control of our government and many of our business and social institutions, and is demanding the surrender of the rest. They, like Sennacherib and his servants, are convinced that God cannot deliver His people out of their hands.

They would be very well-advised to repent, to turn from their evil ways, and humble themselves before the Lord. But don’t hold your breath waiting for that to happen. These are The Smartest People In The World: they don’t humble themselves for anybody. Nor will they repent.

Reputable Bible Scholars Inc. assure us that the destruction of Sennacherib’s army never happened, Jewish scribes just made it up, we can be sure of that because the Assyrians never put up a monument to their catastrophe in Judah… blah-blah-blah. Sweet are the words of fools in the ears of other fools.

9 comments on “How God Dealt with the King of Assyria”