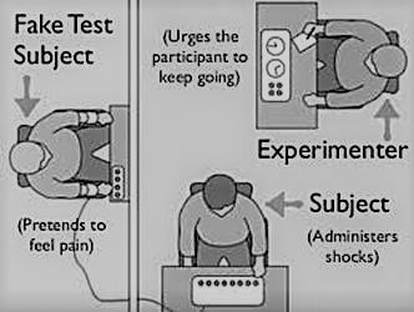 Have you ever heard of the Milgram shock experiment?

No one refused to administer electric shocks.

In one of the variations of the experiment, obedience to the “order” to administer shocks declined sharply when the “scientific authority” (actor in a lab coat) wasn’t present.

What does this tell us about ordinary people and perceived authority? Dr. Milgram said his purpose was to explore why the insane “orders” of Nazi war criminals were carried out by supposedly normal people.

It seems “ordinary people” are not as nice as they should be.

If we truly believed God’s authority was supreme over all others, then would we not refuse to harm others, despite “orders” to hurt them? Would tyrants have the power that they have, if no one would carry out their orders?

But I remember grade school, and the teacher saving herself work by having us grade each other’s spelling quizzes. Boy, do kids like to mark down other kids! And just give some child the “authority” to hand out detention to others, and see what happens. So the Milgram experiment held no surprises for me. Because I remember school.