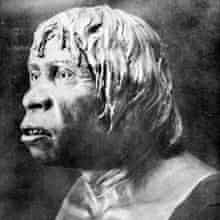 Piltdown Man (you could look it up)

Local legend has it that the last Piltdown Man lives in the space between the two surviving walls of what was once a carriage house. I remember when someone had an antique car stored in it. But a new landlord tore down the old garages, leaving poor Mr. Piltdown with something less than adequate housing.

They Never Learn (Scientists, That Is)

Oh! British scientists wanted so badly, so passionately, for Piltdown Man to be the real deal! American scientists were never entirely sold on it, but they didn’t want to stage another Lexington & Concord. They bided their time until the hoax was fully exposed during the mid-1950s… but not before Piltdown Man had gotten gigs in all the textbooks.

But the Brits have some ammo of their own. All they have to do is whisper, “Nebraska Man”… and it’s a food fight.