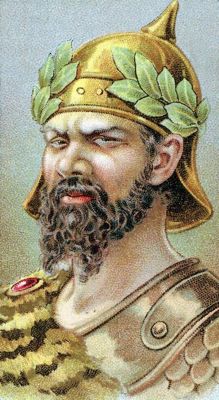 Greetings! Betcha thought I was dead. Well, I’m not–just enjoying an unusually long retirement. I haven’t sacked a city in, oh, must be going on 17 hundred years. You lose your taste for it–ya know?

I’m here today because there was an incident in my career that the old poops who write history books have kind of forgotten about.

I forget what year it was. I was kind of hovering around the north of Italy with my Huns, thinkin’ about goin’ to Rome and raisin’ some cane, when some Romans showed up at my camp and–you’re not gonna believe this, but it’s true!–they handed me a petition. I mean, who petitions Attila the Hun? I was so surprised, I forgot to have them put to death for bugging me.

This petition, signed by everybody and his brother, actually asked me to hurry up and invade Italy! They were so ticked off by the high taxes the Roman Senate laid on them, they figured that whatever my Huns snatched up, whatever loot and booty and plunder we took, would still be a lot less than the Senate meant to take. And maybe I’d knock out the Roman army while I was at it.

All right, I never did get all the way to Rome, and I got out of Italy because it was getting too weird there–but I never forgot that petition.

And here’s the kicker. The tax rate that all those Roman farmers and businessmen were so upset about… it was only 5 percent!

Put that in your pipe and smoke it.