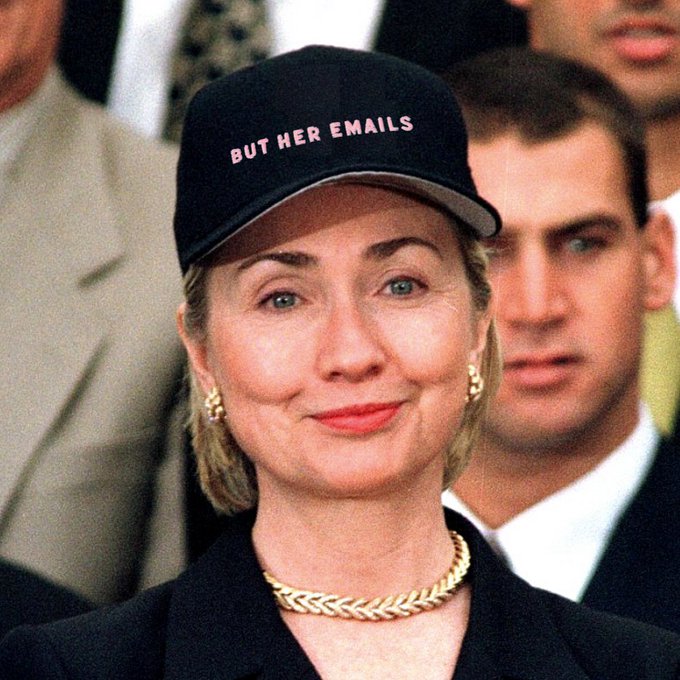 No sooner had the rogue FBI raided President Donald Trump’s home–seeking evidence of “potential (!) mishandling of classified documents”–than Hillary Clinton, two-time loser in the presidential sweepstakes, came out of the woodwork with $32 caps that read “But Her Emails.”

That refers to the thousands of classified documents she mishandled–and later destroyed–while she was secretary of state for *Batteries Not Included. She had confidential, classified emails stacked up on a private server–a lapse for which a low-level State employee would have been imprisoned.

Speaking of lapses, here’s what she really looks like.

So, yeah, she’s out there rubbing it in our faces, reminding us that she totally got away with trashing thousands of special government papers. She sez her little hats are sold out, but they can print up more. The money will go to her “Onward Together”–“onward” to what? (don’t ask!)–Political Action Committee.

Go ahead, Hillary–run for president in 2024. I double-dog dare you.

Run as many times as it takes to destroy the Democrat Party.

They raised the stakes this week, raiding President Trump’s home.

They deserve to go down the tubes with Hillary. Someday “I’m with Her” will be a thing they’ll wish they’d never said.