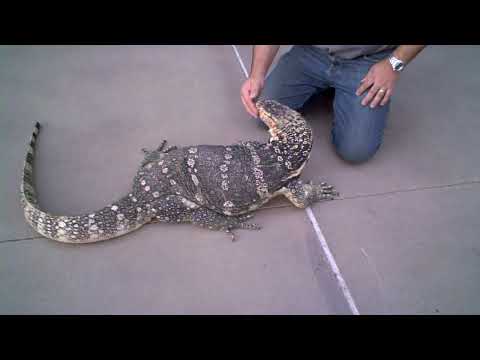 I just had to show you this video of a great big iguana making like a dog when daddy calls.

The body language tells us this iguana is conflicted. Notice the head-bobbing as he approaches the man. If the man were another male iguana, that gesture would mean “beat it, ya bum!” Also, the lizard’s mouth is open, which means he’s thinking seriously about biting the man. But if he were really serious, he’d straighten his legs to stand higher off the ground and cock his tail to wack the man. He also hasn’t bothered to puff out his dewlap.

I think what we have here is an iguana who sincerely likes his owner but can’t help reacting to him, when he first sees him coming, as if he were another lizard. Like all properly socialized iguanas, though, he is able to curb his instinct for aggression.

If you’re thinking of acquiring an iguana for a pet, here are two simple rules to follow. 1) Get a young one, so there aren’t any nasty habits that may not be able to be broken. 2) Handle your put a lot, every day, feed him by hand, carry him around–and he will come to love you for it.

I speak from experience.

Hi, Mr. Nature here! No more politics for a while, eh? Let’s look at lizards instead.

Here is an adult male bearded dragon–they’re from Australia, and have become very popular as pets–getting upset with his reflection in the mirror because it doesn’t seem to know the rules that govern lizard interaction. It just copies whatever gesture the real lizard makes. Anyone who has had a kid brother or sister knows how irritating that can be.

A lot of unrelated kinds of lizards use head-bobbing as a means of communication. The polite response, among bearded lizards, is to answer the head-bob with a submissive gesture, which keeps everything nice and peaceful. If you bob back, as the reflection does, you’re looking for a fight.

Note the lizard running around, trying to see if he can get behind the mirror to take a bite out of the supposed newcomer. Like most animals, lizards can’t recognize a reflection for what it is. Unlike some people, they won’t fall in love with it.

When I was a kid, I had a dime-store “chameleon” (not a real chameleon, but a Carolina anole) who went absolutely postal whenever he saw his reflection. You wouldn’t believe how mad he got.

In real lizard life, though, head-bobbing, arm-waving, stomping, push-ups, and other gestures often preserve the peace and keep lizards from getting injured in fights. Once they get to know each other better, and decide they can get along, they stop the head-bobbing.

My iguana never head-bobbed because he got along with everybody–except for a certain cat who would come into the room for no good purpose, and the iguana knew it. Her he would attack on sight, never mind the head-bobbing. With the other cat and the schnauzer he was the best of friends.