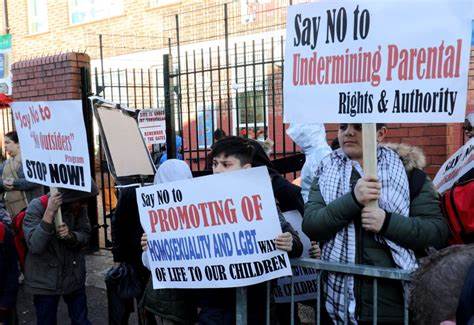 They’re not listening to you, people

Stop me if you’ve seen this pattern before: 1) “School” (they’re still calling them schools) plugs in some outrageous innovation that 2) gets the public hopping mad. 3) In the face of widespread protests, the school removes the innovation. But when 4) all the heat dies down, 5) they plug it back in.

This is what has happened in a school district in Birmingham, UK. Last year they plugged in a “gay”-promoting “curriculum” and parents, mostly Muslims, pulled 600 kids out of the schools and kept them out until the district got rid of its “OK to be gay” curriculum. Victory for the good guys, right?

Wrong. When the storm of controversy passed, the school just recently re-installed the “gay” classes; and this time the first parent to object was arrested–this is what I mean when I refer to police as “Herod’s men”–and, if found guilty of God knows what, could be fined 2,500 Pounds and locked up in jail for three months (https://www.breitbart.com/europe/2020/02/06/uk-muslim-father-faces-jail-pulling-9-year-old-son-out-lgbt-lessons/).

Well, parents, the “school officials” didn’t learn their lesson last time, did they? Now they’re using strongarm methods. Your kids are gonna be “gay” or those officials will know the reason why!

So you’re going to have to pull your kids again. All of them. Go on–dare them to look up every mother and every father in the school district. They’ll back down again. And maybe sue them for it, too.

Humanists–they think they own us and own our children. They have lost their fear of normal people.

We need to bring that back.

“You dirty racist, you!”

Always bear in mind our recently-discovered principle: If liberals say something is a problem, it isn’t a problem. Like, for instance, rampant “racism” among Britain’s six and seven-year-old schoolchildren.

Of course, when you call everything “racism,” then you just naturally wind up with a lot of “racists.” And then, forsooth, the government must act! For which they’ll need more money and more power, so fork it over.

No one can go very far wrong by taking as a given the untruthfulness of anything said by a leftid.