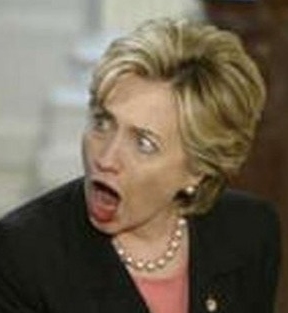 Hi, I am blogging here today insted of that other guy because he is not here. I am in my fifth year of  collidge and in another two yrs i will get my batcheler’s degree in Liberation Studies, if I keep on getting extra credit for marching in Gay Pride parades and keying cars.

I am here to tell you to vote for Hillery for President! You have got to vote for her because she is a women, and it is time we had a women president. If you dont vote for her, you are a sexist and a hater, and you hate women too. My prefesser he says that everybody who doesnot vote for Hillery is against Science and also hates Gay People and childrens and The Poor.

My mother she says that Hillery is the most dishonest women in the world, and a big fat crook, and a hippocrit to boot, but my prefesser he is smarter than anybody’s mother and he says my mother is a enemy of the human race. He has promised to give us students class credit for all the time we spend volunteeering for Hillery’s campain and working for her.

Also Hillery ate a burrito the other day and that means she is fond of common people and not just interleccturals like us. She even wore a moo-moo when she did it!

My prefesser he says that any of his students who dont vote for Hillery, he is going to flunk them out of collidge. Well, it would serve them right! I think everyone should vote for Hillery and get in trouble if they dont.

Well, now I have to go to my next class and learn some more true facts. Remember, vote for Hillery or else.

11 comments on “Hillery for President!”