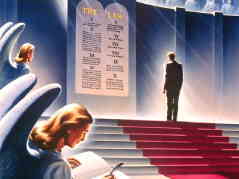 So here he is, Dennis Bottwitz, aka “Carlos Dangle,” up in front of God’s judgment seat. He can’t see all the way up to the top, but further down there are angels to question him.

They want to know why he committed adultery, when God told him not to.

“Um, well, er… Y’see, it was the slogan that did it,” he finally says, after a lot of hommina-hommina. “Yes, the Ashley Madison Dating Service slogan. Life is Short. Have an Affair.”

“It was only an advertising slogan,” the prosecuting angel says.

“Yeah, yeah, I know! Except it got me really thinking. Like, life really is short. And you got to enjoy it while you can. And it was supposed to be discreet, no one was supposed to know…”

“So you signed up? Did you really think you’d get away with it?”

“Well, gee whiz! Have a heart! I never meant to do it more than once. Just once! How was I supposed to know my life was going to be that short? One night, just one night–and the next morning, that moron in the Volt hops the curb and kills me! And next thing you know, I’m here. And you’re going to send me to Hell because I made one mistake?”

“You didn’t do it by mistake, Dennis. You did it on purpose.”

Dennis is really upset now. He can’t help shouting. “Yeah, well, so did 38 million other customers! And that’s only the names that the hackers actually got. And so did I dunno how many million guys who did it on their own without any help from Ashley Madison! Millions and millions and millions! Are you gonna send us all to Hell? Hah! There won’t be room for us down there!”

The angels exchange pitying looks and shake their heads. Poor stupid mortals. Bad enough they’re lumbered with original sin. That they should also be such idiots seems harsh.

“Dennis, have you anything to say before this court passes sentence on you?”

“Have I got anything to say? I’ll say! [Censored] What kinda raw deal is this, anyway? Nobody ever told me this crazy setup was real! I mean, who would ever think that? Angels! Heavenly court! Nobody believes this stuff! Nobody! Just try to tell anybody that it’s real. They’ll laugh in your face! I mean, holy mackerel, who thinks Hell is real?”

After the “Guilty” verdict, as Dennis is taking that last, long, going-down ride in a certain kind of elevator never seen on earth, he bewails the unfairness of it all. The angelic elevator operator listens sympathetically.

“Like, how was I ever gonna beat the rap? No one cares about adultery! It’s just having an affair. Everybody does it. Most people can’t even spell ‘adultery’! No, they had it in for me, up there. They all had it in for me. I was guilty before I even took the stand. Go ahead, tell me I wasn’t! Tell me what I could’ve said to get out of this!”

But by now the car has finished its descent.

5 comments on “In Front of the Heavenly Tribunal”