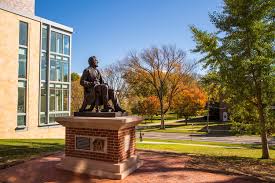 New Brunswick Theological Seminary: I walked past this statue every weekday for four years.

In 2004 I interviewed Dr. Norman Kansfield, president of the New Brunswick Theological Seminary (Reformed Church in America), who was about to get sacked by the RCA synod for performing a “gay marriage” for his daughter.

I am posting this today because I want to make it clear to everyone that the Roman Catholic Church is very, very far from being the only church with leaders who reject God’s laws and the clear teaching of the Scriptures. As a high official of the United Methodist Church once told me, “The first thing I learned in seminary was that the Bible is not God’s word.” That remark still makes me shudder.

The rot of this evil age has set into many churches in many denominations. Many of us have given up on the whole idea of an organization called a “church.” And many of us haven’t. Let’s face it: if you’ve got two or more people in it, it’s an organization, however disorganized it may appear to be.

As Ben Franklin once said, “We must all hang together, or surely we will hang separately.”

Thanks to Jill at Chalcedon HQ for retrieving this article for me.