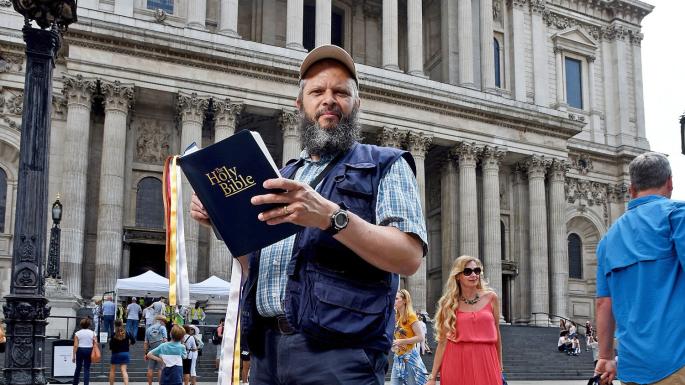 I’ve been thinking about this video Linda posted yesterday as a comment on this post, “Because They’re Crazy” (https://leeduigon.com/2018/07/24/because-theyre-crazy/). Scroll down a bit, and you’ll find it.

In it we see a street preacher in London being arrested for preaching outside St. Paul’s Cathedral, on church property. Two Bible verses sprang to mind.

When Our Lord Jesus Christ was arrested by temple officials in the garden of Gethsemane, he said to them, “When I was daily with you in the temple, ye stretched forth no hands against me: but this is your hour, and the power of darkness” (Luke 22:53).

Jesus preached in and around the temple in Jerusalem. The authorities hated it, but didn’t dare move against Him in broad daylight. They had to do it under cover of darkness, for no one to see.

After His ascension into heaven, His disciples preached in the temple and they were arrested–by day. Officials ordered Peter not to preach Christ anymore, to which he answered, “We ought to obey God rather than men” (Acts 5:29).

I’m not sure which of these verses applies here, because I don’t know what the laws were in Jerusalem at the time, nor do I know what the law is in London today. But I do know that church property is private property.

If I were to cross the street and preach on the steps of St. Francis Cathedral, I doubt the church would tolerate it indefinitely–although some of the local teens use those steps as a skateboard rink and I’ve never seen the police chase them away. I’m pretty sure the church would eventually demand that I go somewhere else, and call the police if I refuse. Not that I intend to put this to the test: getting arrested is not something I need in my life just now.

They didn’t arrest Jesus openly because they were afraid of Him, and afraid of the people who flocked to hear Him. My personal belief is that some of the temple authorities already knew that Jesus was indeed the Son of God, and that’s why they had Him crucified: they feared His authority would be greater than theirs.

They were a bit afraid of Peter and John, too, because the disciples had performed miracles of healing and the people were coming more and more to see them. They wound up persecuting the disciples, too, when arrests and beatings couldn’t silence them.

I don’t think these dynamics were involved in the arrest of the street preachers in London. Again, I have to be careful because the video doesn’t give us the church officials’ side of the story.

On the whole, though, I think I have to agree that the churches’ property rights must be respected. If anyone can preach on church property, that could open a can of worms that wouldn’t be easy to close. What if an atheist stood on church property and preached atheism? It could start a riot. Or a Muslim, or a scientologist, or a cultist? You see the problem.

In our country, unlike anywhere else, our First Amendment protects our free exercise of religion. We ought to guard it zealously, and take back ground that has been wrongfully taken from us. Even so, we cannot come onto private property uninvited and preach whatever we want to preach.

In East Lansing, Michigan, a few years ago, a band of “gays” invited themselves into a church and disrupted the services (http://lansingcitypulse.com/article-2302-Gay-anarchist-action-hits-church.html). They said they were doing some preaching of their own. Most of them left before sheriff’s deputies could arrive. The church chose not to press charges, and as far as I know, the incident was not repeated.

But it does show us a destination to which we don’t want to go.