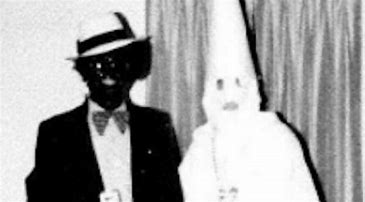 One of these is Gov. Northam in his college days. We still don’t know which one.

As long as they’re trying to erase the Second Amendment, Virginia’s new Democrat commissars have decided to have a go at the First Amendment, too. Which is why we need our right to bear arms…

A bill in the Michael-Bloomberg-bought-and-paid-for Virginia legislsature, HB1627, would make it a Class 1 misdemeanor, punishable by arrest and fine, to criticize the state government (https://nationalfile.com/virginia-dems-introduce-anti-free-speech-legislation-to-make-criticizing-them-illegal/?fbclid=IwAR3huQANFuwws2-W-opTRBYQO4OXycVdih2dCmg5CYgfM2Kh7l7QVUtsH9U).

The words actually used here are “threats and harassment of certain officials,” and, particularly, “harassment by computer.” The terms “threats” and “harassment” are left completely undefined.

If you should post a remark on a blog to the effect that “Gov. Northam is a baby-killing cannibal,” this bill would give the Richmond police the authority to swoop down on you no matter where you are in the state, and arrest you.

Specifically exempted from criticism, unflattering comments in the social media, or loud raspberries would be the governor, governor-elect, lieutenant governor, lieutenant governor-elect, attorney general, attorney general-elect, a member or employee [?] of the General Assembly, a justice of the state supreme court, or a judge of the court of appeals.

That pretty much covers it, don’tcha think?

Does any Democrat acknowledge any fragment of the Bill of Rights? That this bill is riotously, flagrantly, boisterously, uproariously unconstitutional seems to have occurred to none of them.

This is the Democrat Party, folks.

Crush them in November.

4 comments on “Think of It as Northern Venezuela”