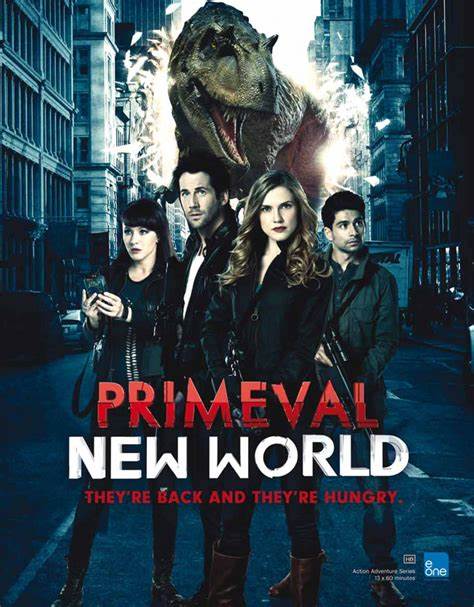 With my brain pretty much stuck in neutral, Patty suggested I take a day of rest and watch some dinosaurs. Why not? I’m always up for dinosaurs.

Primeval New World is a Canadian sequel to the British series, Primeval. It very badly needs Ben Miller, but he wasn’t available. Oh, well–it still has really cool prehistoric animals. They inspire me. And take my mind off the schiff-festival that’s today’s nooze.

Now, this show really is mindless entertainment. There are these weird magnetic thingies that allow dinosaurs to wander into our world from theirs, and when they get here they’re always hungry because apparently they try to kill and eat anything that moves… etc., etc. And they’re opposed by a little group of hot sexy good-looking young heroes and heroines who have no personalities. The dinosaurs are more realistic than the people. I’m not sure whether the dinos in this “Primeval” are Tim Haines’ creations–but they could be.

Well, I wasn’t looking for King Lear, was I? Mindless I wanted, mindless I got–and I’m all the better for it. Give me a Baluchitherium, or even a Uintatherium, and those jagged brain waves go away.