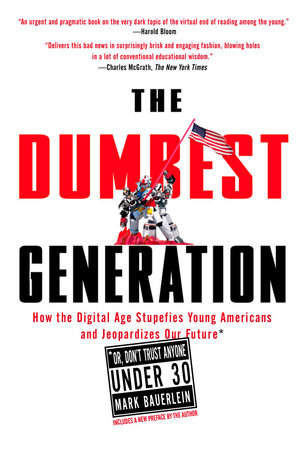 I spend hours every week studying the follies and deficiencies of our public education system, the costliest ever created in recorded history. I know it’s awful.

But just one chapter into this book–The Dumbest Generation, by Mark Bauerlein–had me shaking my head and muttering to myself.

It’s far worse than I thought.

Bauerlein, a college English professor, realizes something I realized years ago. The single worst thing about public school is, it makes your age-group peers the most important people in your life. That in itself was one of the worst ideas ever. But now, says Bauerlein, social media and a plethora of electronic gizmos have made an atrocious situation horrifyingly worse.

Kids and teens now live in the moment, cut off from the past, never pondering the future, unable to look any farther than their own little social media bubbles–obsessed with what other kids are doing, saying, playing… And they know… nothing.

All those boxcar-loads of money spent on “education,” and they come out of college knowing bloody nothing. They’re fixated on their peers in the social media. They never look beyond it. No history, no civics, no literature, no nothing. Maybe they’ll read a comic book now and then. And watch TV.

The author bases these claims on the results of many authoritative studies involving hundreds of thousands of school and college students.

Well, they can all vote, can’t they? And they’re always ready to Protest For Social Justice. Because it’s expected of them. Because their peers do it.

It is literally the march of ignorance.

I’m going to review this book for Chalcedon, so I have to read the rest of it. And I think I’d better pray harder! We are talking about creating a country full of conformist know-nothings who will not be able to sustain a constitutional republic. I’m a political scientist, I know these things, trust me: you can’t have a republic of idiots.

11 comments on “This Book Has Got Me Cranking!”