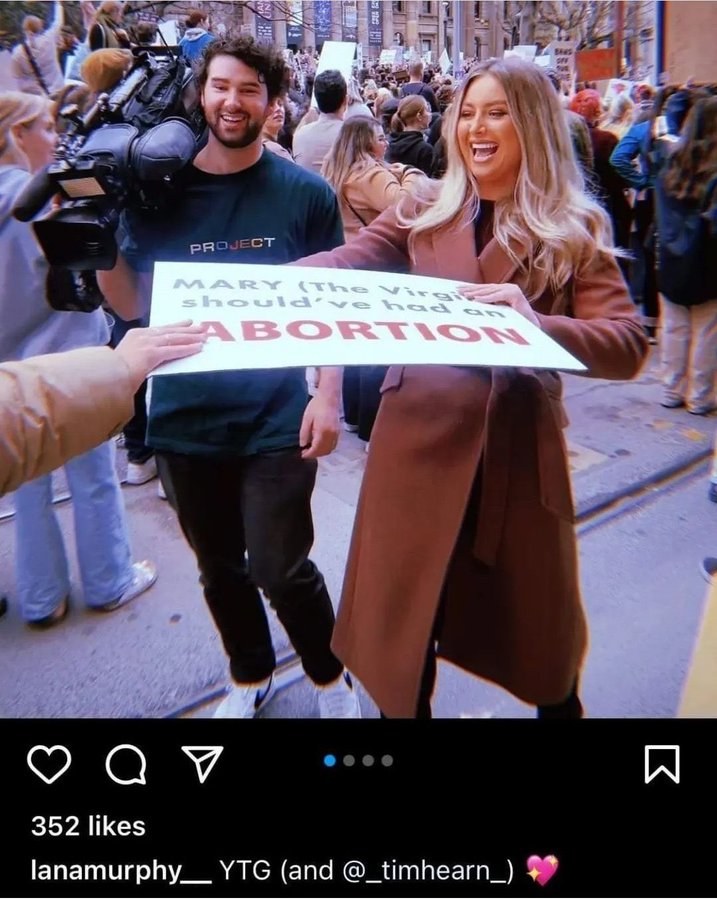 When a “renowned journalist” in Australia got her fingers burned, playing with fire, she played dumb. Honk if she fooled you.

“Renowned journalist” Lana Murphy covered a pro-abortion demo in Melbourne–although why Australia should have a near-riot over a U.S. court decision is pretty far beyond me. She was photographed holding a sign that said,”Mary [Virgin Mary, that is] should have had an abortion.”

The Renowned Journalist posted the pictures on social media, as if she were proud of them. Then people saw the pictures and the backlash hit.

First the Renowned Journalist said it wasn’t her sign, someone in the crowd handed it to her. Well, she looks awfully happy to be holding it, doesn’t she?

Then she “apologized.” For a Renowned Journalist to blatantly take sides in a public controversy was, she said, “a mistake.” Funny: I could’ve sworn she’d done it on purpose.

Then the network announced that the Renowned Journalist would be given “counseling” so that she would understand that cheerleading for abortion and blaspheming against the Christian faith just might somehow offend some people. Apparently this particular Renowned Journalist is as thick as two bricks–“Gosh! How could I have ever guessed they’d be offended?”

She has her defenders on the social media. One ignoramus tried to bite “the Christo-fascists” who got the Renowned Journalist pulled off the air for a day or two.

Tell ya what, sunshine. Why don’t you and your friends fly over to Iran, or Afghanistan, or Saudi Arabia and try marching around with signs that say Mohammed’s mama should’ve had an abortion? Try that and see where it gets you. I’m guessing it gets you dead.

Meanwhile–hey, Lana, the cat’s out of the bag, now everybody knows where you’re coming from.

But who trusts “journalists” anymore?

2 comments on “Tell Me Again Why We Despise ‘Journalists’”