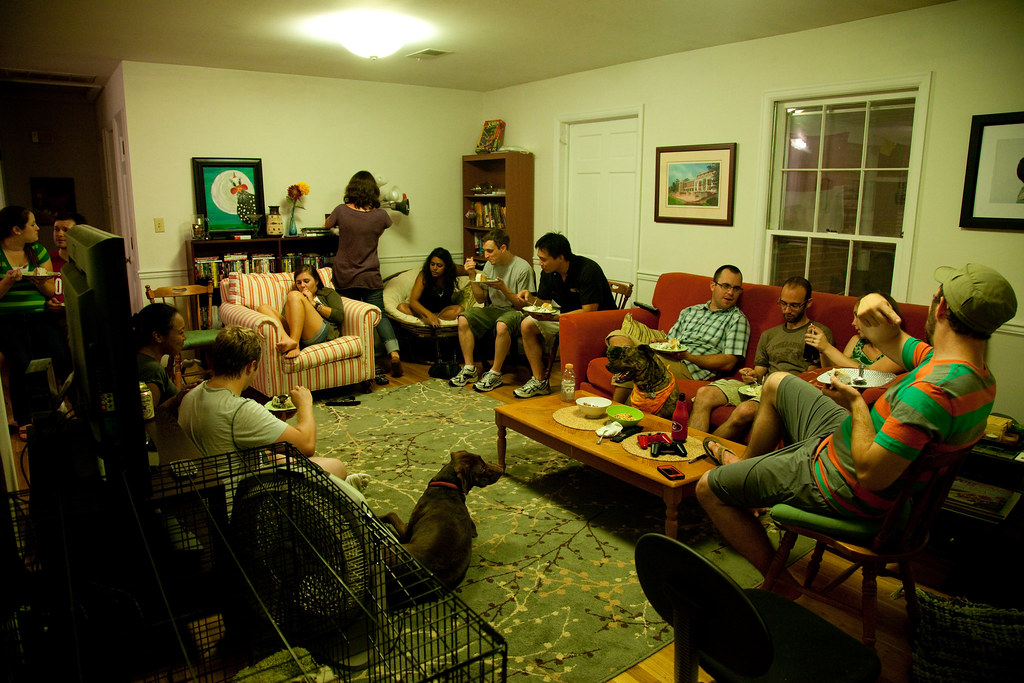 Have you noticed? As you get older, a lot of big things get small, and small things get big.

Years, for instance. The more years you live, the smaller they get. When I was nine or ten years old, a year was an eternity. But this year, 2019, whizzed by so fast, I almost missed it.

Mr. Bruno, across the street, went spear-fishing once and brought home two enormous striped bass. They looked enormous to me! But now I realize they couldn’t have been that big, because they both fit in the kitchen sink.

It seemed a small thing, an everyday thing, to me that my father was able to keep everything around our home in good repair. Like, he just did it, no big deal. But now that I’m older than he was at the time, I can’t imagine how he did it! How did he ever manage to do all that work around the house, and still do everything else he did?

We had a lot of family Christmas get-togethers in Grandpa’s living room. When I was a boy, it seemed a very big room. Now I can’t believe we ever fit so many people into it.

The street we lived on: I was there the other day, and it seemed way too short for all those houses. I am sure it used to be much longer. That’s how I remember it.

Shoveling snow off the sidewalk: that was a little job, wasn’t it? But it isn’t anymore. Now it’s a big job.

What would it be like, if things stayed the same size for as long as we knew them?

I’ve heard there’s a place in Lintum Forest like that, but I haven’t found it yet.

I don’t know about you, but Grandma Moses’ paintings always go straight to my heart. If only I could find my way into one…!

What do you say to a little trip down Memory Lane?

When I was 12 or so, maybe a little younger, my Grammie and her new husband took my brother and me with them on what was meant to be a camping trip. Grammie was a Pennsylvania farm girl, and the campground happened to be very near her home; so it wasn’t only a camping trip, but also a chance for her to visit her brother, cousins, and other family members she hadn’t seen in years.

After heaven knows how many hours on the Pennsylvania Turnpike, we finally arrived. We stopped at the farmhouse first, and there things began to go pear-shaped.

First the car door closed on my finger. Now that’s pain! Then we went on to the campground, set up the tent and the cots, had a bite to eat, and went to bed. It rained heavily that night. That was how we discovered the waterproof tent wasn’t even sort of waterproof.

So instead of camping, we spent the whole week at the house. It was a very big old house that had been added to, now and again: a map would have come in handy.

But it was wonderful! Four generations of the family were living there, with room left over for guests. They had no TV, so after supper each night, everybody who didn’t fall asleep played games. There was always someone to play with.

Uncle Walt taught us to make really good slingshots. Great-Uncle Mac took us fishing. We played with our distant cousins. Then a lot of slingshots got made and we had a rousing good slingshot war in which three generations were represented. *

I wouldn’t have minded staying there all summer, or even longer. But eventually we had to come  back, and none of us ever had occasion to go there again. I doubt I could even find the place, now. It’s just another one of those much-loved places that I might have only dreamed of, for all that remains of it now.

But it was a good dream.

*P.S.–For ammunition we used harmless soft green pine cones–no danger of anyone putting your eye out.

Well, we’ve got 28 inches of snow here in Central New Jersey this morning, and I don’t reckon to be going anywhere.

Whenever it snows any serious amount, I remember what a pure, intense delight it was to wake up in the morning and discover there would be no school that day. I’ll never forget that feeling.

Ah, sledding! Whooshing down the hill at Tommy’s Pond on the ol’ Flexible Flyer. We could keep that up for hours.

The pond was a lot of fun at night, too. Everybody came out for the ice-skating. There was a fire to warm your hands, a bench or two for when your ankles gave out, and whole families gliding around on the ice.

Snowmen standing guard in every yard, snowball fights and snow forts–and oatmeal never tasted so good as it did when you had it for breakfast on a snow day. My wife adds: “Pancakes for breakfast, and we could all have breakfast together because it was a snow day and my father had to stay home from work. That was when he could spend all day playing with us.”

Yeah–and my aunts took me to every lake and pond for miles around for the ice-skating. We got to be true connoisseurs of frozen bodies of water.

I guess I ought to point out that a lot of cities, towns, and counties have banned sledding in recent years, because every human activity in which one just might get injured ought to be banned for our own good, and it’s been many a year since I’ve seen anyone ice-skating on Tommy’s Pond–or anywhere else outdoors, for that matter.

Oh, well, maybe I dreamed it. But if I did, it was a good dream.

Once upon a time, my friend and I got lost in the woods. I was five years old, he was four. We lived next door to the local playground, and the woods came right up to the edge of it. So we wandered into the woods and by and by discovered we were lost.

By “lost” I mean totally without a clue, not the foggiest idea where we were, and quite upset by it. We weren’t old enough to imagine ourselves winding up as skeletons among the underbrush, but we were good and scared.

We stumbled around at random until suddenly we emerged from the woods into someone’s back yard, in the little village of Bonhamtown (now paved over for a highway, not a trace of it left).

An old man came out and instantly identified us as being out of place, probably because he recognized all the small boys in his neighborhood. He asked us where we lived, somehow made sense out of our distraught babblings, and took us each by the hand and led us back through the woods and back to the playground, within sight of our respective homes. I was amazed at how little time had passed: my mother hadn’t even missed me. I wasn’t even late for lunch.

I’m pretty sure I didn’t tell her where I was, lest she forbid me to play in the woods anymore.

I look back on this adventure with warm gratitude to that old man, whoever he was, and I will always have a soft spot in my heart for vanished Bonhamtown.

Standing tall among my boyhood memories is the image of the good teenager on our street, a young man named Peter. Tall, handsome, he had a brilliant smile and he wasn’t stingy with it. My mother and father, and the other mothers and fathers on the street, thought very highly of him; and all the younger kids looked up to him. He was the kind of teen whom it was very easy to imagine with a sword and a plumed hat, always ready to defend the weak.

I don’t know how Peter did it; indeed, he wasn’t actually doing anything: just being himself. There was nothing phony or contrived about him. And he was interesting. He used to do things that nobody else did: like sitting down at one of the picnic benches, in the playground at the end of our street, with a bucket of boiled crabs. These he freely shared with those few of us who were brave enough to eat something that looked so strange.

I learned to play chess from the kids next door, and when they weren’t around, sometimes I would take my chess set to the playground, set it up on a picnic table, and play imaginary games.

One day Peter, twice my size, came along and offered to play with me. He won, of course, but I hardly noticed. I was playing chess with Peter! It made me feel like a million dollars. He gave me some pointers that helped me play better, and from then on he and I would play once a week or so. I never lost that feeling of having been let in on something special.

When Peter came of age, he joined the Air Force. My family moved to another neighborhood, so I never saw him again.

I have no idea where he might be now; but it wouldn’t surprise me in the least to learn that he was now a king in Narnia.