Don’t be entirely down on winter: because, if you’ve got cold days and colder nights, snow on the ground, ice hanging from your gutters, and teeth chattering, there’s one thing you absolutely, positively, don’t ever have to worry about. Not ever.

Watch these bugs devour everything in their path, and reflect on the fact that a nice big snowman would stop them in their tracks.

So much for life in the tropics!

When Snow Time Was Happy Time 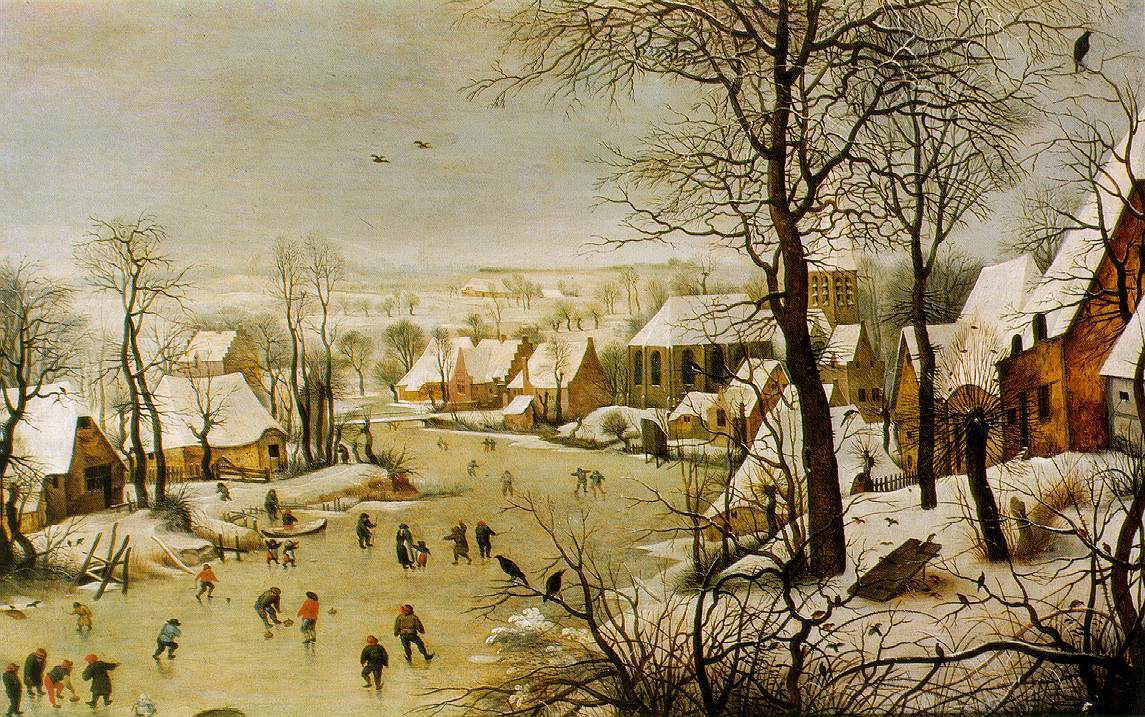 Well, we’ve got 28 inches of snow here in Central New Jersey this morning, and I don’t reckon to be going anywhere.

Whenever it snows any serious amount, I remember what a pure, intense delight it was to wake up in the morning and discover there would be no school that day. I’ll never forget that feeling.

Ah, sledding! Whooshing down the hill at Tommy’s Pond on the ol’ Flexible Flyer. We could keep that up for hours.

The pond was a lot of fun at night, too. Everybody came out for the ice-skating. There was a fire to warm your hands, a bench or two for when your ankles gave out, and whole families gliding around on the ice.

Snowmen standing guard in every yard, snowball fights and snow forts–and oatmeal never tasted so good as it did when you had it for breakfast on a snow day. My wife adds: “Pancakes for breakfast, and we could all have breakfast together because it was a snow day and my father had to stay home from work. That was when he could spend all day playing with us.”

Yeah–and my aunts took me to every lake and pond for miles around for the ice-skating. We got to be true connoisseurs of frozen bodies of water.

I guess I ought to point out that a lot of cities, towns, and counties have banned sledding in recent years, because every human activity in which one just might get injured ought to be banned for our own good, and it’s been many a year since I’ve seen anyone ice-skating on Tommy’s Pond–or anywhere else outdoors, for that matter.

Oh, well, maybe I dreamed it. But if I did, it was a good dream.

It’s Still Cold Out There!

Okay, there isn’t really a rhino in my yard. But if there were, it’d be this kind of rhino.

But it only looks like the Ice Age out there: snow on the ground, icicles hanging from the eaves. God has not forgotten Spring. It’ll be here by and by. All the birds around here are singing about it already, even though it was 5 Global Warming degrees out here this morning.

No, New York Has Not Become Daytona Beach

Thirty years ago this week, in 1985, “government scientists” confidently predicted that, due to man-made Global Warming, New York City, by the year 2015, would be “like Daytona Beach” ( http://godfreydaily.com/2015/03/05/flashback-1985-govt-scientists-once-predicted-nyc-would-resemble-daytona-beach-the-daily-caller/ ).

Yes, that was the “settled science” back then, based on “irrefutable data,” blah-blah. But today, in 2015, New York has just had another major snow storm and here, a few miles south of the city, it was 8 degrees this morning.

Good thing we didn’t act on that prediction, isn’t it?

If you think I’m beating a dead horse, think again: this horse ain’t dead. Big Government, Big Science, and the United Nations Dictators Club are still going all out for Global Warming. It’s even rumored that the biggest Global Warming guru of them all, Al Gore, is thinking about making another run for president.

Saving the Planet is still the world’s greatest excuse for growing the government, raising taxes, and gobbling up personal liberty. It justifies anything and everything; that’s why libs and progs still like it.

Why do they tell these easily-refuted lies?

To get you to obey. To make you do what they want. Because it fits their “narrative” that each succeeding year is the warmest known in human history, and that unless they are given undreamed-of powers, we’re all gonna die of heat prostration–that, or we’ll just all drown when thousands of our cities wind up underwater.

For as long as the Rulers have that mind-set, the rest of us dare not relax our vigilance.