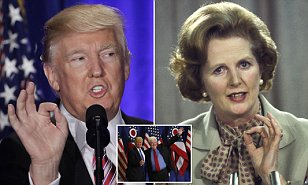 We watch a lot of British comedies, mostly from the 1980s and 90s. And I can’t name a Britcom that didn’t take pot shots at Margaret Thatcher. She was prime minister for 21 years, 1979-90: but to hear the TV writers tell it, no one voted for her, no one liked her, no one had any respect for her–

Today in America, to hear our media tell it, no one voted for Donald Trump except for a tiny handful of white supremacists, no one likes him, no one has any respect for him, he’s universally despised and loathed…

Do they really believe that?

Maybe liberals have gotten so accustomed to winning by force that they’ve forgotten how to argue or persuade. Your newsroom has an editor who’s a Republican? Fire him! There’s a conservative in your faculty lounge? Just chase him out!

One night on the phone, some years ago, I was telling a liberal about a certain sex education textbook. He insisted the book did not exist. “But I have it right here on the table, in front of me,” I said. But it didn’t budge him.

As Joe Biden said, “We choose truth over facts!” That’s for sure. They ought to save it to put on his tombstone.

I wonder now: Are there a lot of details in a liberal’s mental landscape that simply aren’t there in real life? That would explain both their ideology and their behavior. Really–how could you possibly swallow the Green New Deal unless you were delusional?

The prosecution rests, your honor.

8 comments on “The Way They See It (Saints Preserve Us)”