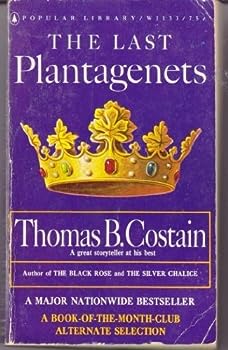 The Last Plantagenets by Thomas B. Costain (1963)

I first read this book when I was 14 years old. My mother read it first and had high praise for it: nothing she liked better than lively, well-written history.

This history is as colorful as it gets. The Wars of the Roses and Richard III; the Peasants’ Revolt; Henry VI sinking into lunacy; William Caxton setting up his printing press–they’re all here in glorious technicolor. And Costain isn’t afraid to admit it when his passions get involved. Nor is he afraid to dip into historical enigmas and controversies–did Richard III really murder his nephews?–weigh the evidence on either side, and try to find the truth.

Many young people think of history as a collection of boring and irrelevant trivia; but The Last Plantagenets is anything but that. It just might whet your appetite for more.

Recommended for ages 12 and up. 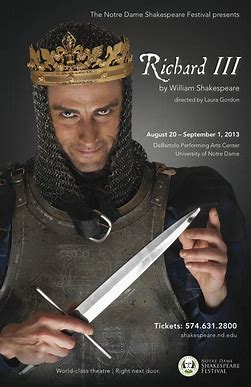 If he’s really worse than Shakespeare’s Richard III, or Iago, your villain’s got problems–which will be passed on to both the writer and the reader.

How Bad Should Your Bad Guys Be?

Well, okay, how many of us have to worry whether the villains we make up are credible? Oh, but many people do like to try their hand had writing a story, so these tips may not come amiss. And fiction can sometimes help us to understand what we see and hear in real life.

My villains all have something in common–they justify themselves to themselves. The elasticity of this approach is limitless. Even Stalin, Mao, or Hitler could have used it, and very likely did.

P.S.–I don’t believe Richard was anywhere near the villain Shakespeare made him out to be. He’s a great example of what happens when your enemies win and get to write the history.

The Daughter of Time by Josephine Tey has been called one of the greatest mystery novels ever written, and it lives up to that billing. It also gives us plenty to think about.

“History” has it that Richard III was a humpbacked monster who murdered his innocent nephews, among other crimes. Josephine Tey has a hospitalized police detective and a research assistant delve into the matter as if it were a modern police investigation: and what they find is that almost the entire history of Richard, almost everything that people “know” about him… is flat-out false. And can be proven to be false!

That’s a major theme of this book. How do things that are demonstrably untrue get entered into the record as “true”, and why do they remain in the record even after they’ve been shown to be untrue–shown again and again, in some cases?

Richard was overthrown and killed in battle by Henry Tudor, Henry VII, father of that bloodthirsty king, Henry VIII. Henry Tudor had all the motivation in the world to destroy Richard’s reputation and plenty of rascals to help him do it. Even Shakespeare! So we know how Richard’s name got blackened, and we know whodunnit. What we don’t know is why it stayed blackened: Josephine Tey was only one of many historical inquirers who exploded the myth.

Lies can have a long shelf life.

Can you imagine what will be done to President Trump’s reputation, should Democrats win this coming election (God forbid)? Can you imagine the lurid tall tales about him that’ll wind up in the “history” textbooks?

The truth about Richard III has been available for many years now.  But the lies are all still there.

It isn’t always a picnic, being a member of a royal family. Consider the case of Juana la Loca–meaning “Crazy Joanna” or “Crazy Jane”–the first rightful queen of what was to become modern Spain.  She died in 1555 after being kept under close confinement for going on 40 years ( .https://en.wikipedia.org/wiki/Joanna_of_Castile ).

Juana was among the most cultured and well-educated women of her time, mastering philosophy, classical languages, and music. She was also beautiful, and a royal heiress–all in all, a fine catch for any ambitious prince.

So why was she diagnosed as mentally ill, given that “Crazy Jane” nickname that’s lasted some 450 years, and locked up for most of her life?

First her father put her away, so he could continue to rule as a king in Aragon. That didn’t work out too well. Then her husband died, and the Hapsburg dynasty had her locked up so they could keep Spain for her infant son, the future Emperor Charles V. It seems everyone who had anything to gain in `16th century European politics was out to keep poor Juana locked up in a nunnery. And in every event the explanation given was her supposed mental illness–a diagnosis which is met with strong skepticism by today’s historians.

But of course Juana’s great exhibition of craziness was her reading and studying the work of Martin Luther, her defense of him and of his doctrine, and the suspicion that she had become a secret Protestant. With that to be held against her, there was no help for her.

I guess you can’t believe everything you read in the history books.

I’ve been reading The Daughter of Time by Josephine Tey (1951), and wishing it would go on for several volumes. This truly is one of the greatest mysteries ever written: I guarantee it.

Here, a police detective confined by injuries to a hospital bed, bored beyond endurance, finds escape in trying to solve a mystery from the year 1483: who killed the two little princes in the Tower of London? Was it Richard III, their uncle? Was he the bloodthirsty fiend Shakespeare painted him out to be?

Applying modern police methods to the case, and his own wide experience as a detective, Allan Grant finds his whole grasp of history suddenly unraveling. What starts him off is this picture of King Richard III–the last of the Plantagenets, and the last English king to die in battle.

Take a good look at that face. This portrait was painted from life. Grant cannot believe it is the face of a monster. It’s a face that has seen much trouble, with more looming up ahead, and has known suffering.

I’d like you to compare it with the face of Henry VII, first king of the Tudor dynasty, the man who killed Richard and took his throne.

Seriously–would you buy a used car from this man? He looks like a Democrat. He looks like he’d steal the teeth out of your mouth.

True, God warns us against judging by outward appearances. But that doesn’t mean we must automatically discard first impressions. Sometimes the inner man shapes the outward man.

Meanwhile, I’ll be sorry when I’ve finished The Daughter of Time. I’ve read a great many mysteries, but never encountered another story like this one.