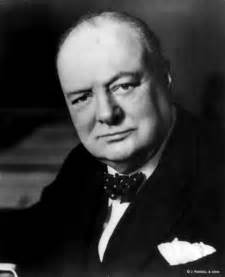 Imagine a world without Winston Churchill. The very best we could hope for would be an America surrounded on all sides by hostile dictatorships. There’s no way Britain would have survived.

Of course, we’re so busy now tearing down statues and erasing our history, there are college graduates who never heard of Churchill, are only just barely cognizant that World War II ever happened, have no idea what it was about, and take the blessings of liberty for granted.

Which is how you lose them. 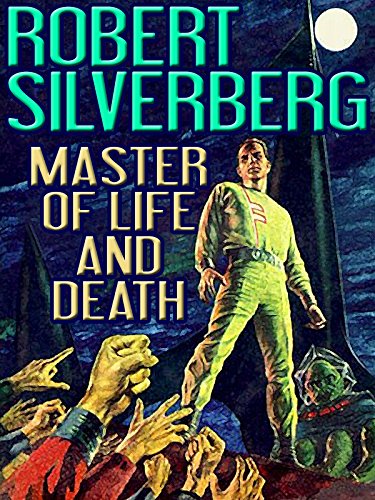 I read this book while I was still in grade school–Master of Life and Death by Robert Silverberg. Its theme was a harsh government response to “overpopulation.”

Fascinating! And it’s a paradox. Silverberg attained financial success as a writer when he was still very young, and yet he was haunted by a conviction that all he’d done was to become a hack who cranked out reams and reams of bilge. And he tells you how he did it! Gee, I never even though of doing most of the things he did to grow his career. And I haven’t yet read how he resolved his inner conflict. All I see is that you can become a big success without doing anything worthwhile.

I suspect that one of the lessons I’ll learn from this book is that each and every published writer must follow his own path to “getting there.” My own path has been long and convoluted: didn’t get a novel published until 1986. If only I’d thought of schmoozing with other individuals in the publishing industry!

But would my own work have been the better or the worse for it?

Once upon a time I wrote a perfectly serviceable thriller that a major magazine would have bought and published–if, and only if, I rewrote it to plug in some sleazy sex scenes. I agonized over this for quite a while; but my wife warned me that if I did it, it would surely come back to haunt me. And how could I ever present such work to my Aunt Betty, the nun, or Uncle Bernie, a Methodist minister? So I didn’t make the changes, and that was that.

Hell’s Cartographers, I think, will be quite an adventure for me. 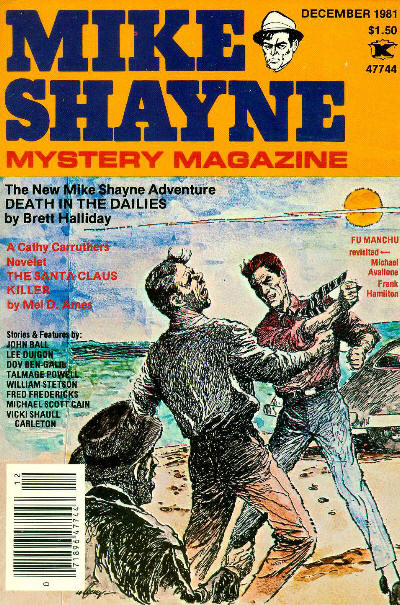 Look what I found! The December 1981 issue of Mike Shayne Mystery Magazine. Look at the cover carefully and you’ll see my name.

It was my very first published story. It was called “The Bun Man.” I went on to write several more stories that editor Charlie Fritch published, but “The Bun Man” was first. And I forget how many stories I had to write before I sold one. You wouldn’t believe how incredibly difficult it is to get a story published! I don’t mean self-published. I mean somebody pays you for your work.

Alas, there is no more Mike Shayne. No more Alfred Hitchcock’s or Ellery Queen’s, either. So many short story magazines gone exinct… as reading itself prepares to join them. What can a writer do but sigh? And pray that maybe someday people rediscover reading. Before we go extinct, too.

We found one of these in Grammy’s house, after everybody died.

It was an official Navy Dept. postcard addressed to my father on May 12, 1944, informing him that the Navy had accepted him as a recruit. He hastened to report for training and made it to the Philippines shortly before the end of the war. Happily, he was assigned to an ammunition supply ship: admirals took pains to keep those ships far away from the shooting. No smoking aboard her, either.

Note the upper right-hand corner: “Penalty for private use to avoid payment of postage, $300.

Anyway, off my father went to fight in World War II. He’d only just finished school. Five years later he would have a wife, a son, and a job he kept for the better part of 40 years.

My father was a giant.

I don’t think they make ’em like that anymore. 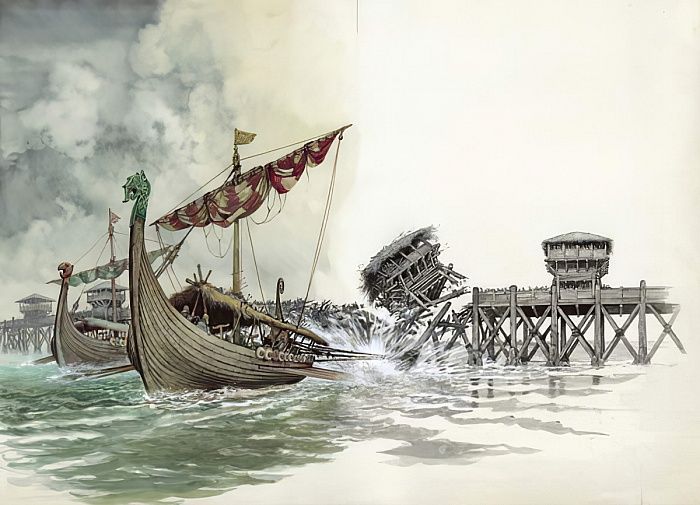 (Thanks to “thewhiterabbit” for suggesting biographical sketches)

Who doesn’t know the song, “London Bridge is falling down”? Ah–but why did it fall? Did someone pull it down?

In 1014 Olaf Haraldsson, a viking from Norway, joined a wider coalition of vikings–we would call them armed robbers, but to the Norse peoples in the 11th century, it was a perfectly respectable way to earn a living–and invaded England, attacking London. During the battle for the city, Olaf tied his ships to some of the bridge’s support beams and had his men row like mad. The beams were pulled loose and the bridge fell down. The defenders couldn’t get from one part of the city to the other to reinforce each other.

This Olaf Haraldsson is known to us today as St. Olaf, patrol saint of Norway and one-time king of Norway.

Olaf’s claim to the throne was no better and no worse than many chieftains’. He got to the top and made it stick for a little while–until King Canute the Great of Denmark engineered a revolt. In 1030 Olaf died in the Battle of Stiklestad. In 1031 he was canonized locally, and in 1164 the Church recognized his sainthood as having universal application.

Yes, yes, there is and always has been endless controversy as to Olaf’s character, his Christianity, his government, and everything else about him. But the fact, the indisputable fact, is that very shortly after his death, people all over the Northlands revered him as a saint and attributed miracles to him. A blind king of the Bulgars swore he “saw” Olaf, by then many years dead, rallying the Byzantine army against him. No one else could see him, but no one accused the Bulgar king of making up a story. Why, after all, should he have done that?

It is recorded in the sagas that Olaf insisted that the men who fought for him should all be Christians. After Stiklestad Canute was not able to hold Norway for long. For a thousand years St. Olaf’s holiness has been a spiritual anchor for Norway.

Not quite what you’d expect from a man who pulled down London Bridge.