Tell Me About Your Censorship Experience 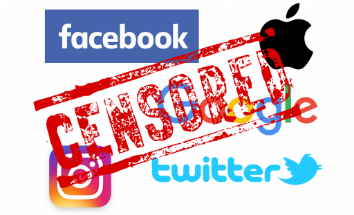 Come on! This really needs to be dragged out into broad daylight–this whole business of the social media censoring conservatives while giving Far Left a free pass.

The Chalcedon Foundation has been targeted as a “hate group,” and I know some of you have been suspended or banned or censored as “haters.” And when do they ever give you the opportunity to defend yourself? They skip the trial and go right to “guilty.” More often than not, they don’t even tell you why they’ve censored you. Or else it’s because of a false accusation that they never let you answer–and never investigate to make sure that it’s true.

We want a stop put to this! But the first step has to be to expose it, to let everybody know about it, and to get the conversation started.

I’m collecting information for an article, and I’d love to hear from you!

I have lived in Metuchen, NJ, all my life. I have been married to my wife Patricia since 1977. I am a former newspaper editor and reporter. I was also the owner-operator of my own small business for several years. I wrote various novels and short stories published during 1980s and 1990s. I am a long-time student of judo and Japanese swordsmanship (kenjutsu). I also play chess, basketball, and military and sports simulations. END_OF_DOCUMENT_TOKEN_TO_BE_REPLACED
This entry was posted on Saturday, June 15th, 2019 at 8:08 am and tagged with a message to my readers, censorship of conservatives, Facebook censorship, Google censorship, reader response, social media censorship, YouTube censorship and posted in Articles, news, Uncategorized. You can follow any responses to this entry through the RSS 2.0 feed.
« ‘Collidge Students Mistake Priest for Klansman’
What’s with the Doctors? »

One response to “Tell Me About Your Censorship Experience”