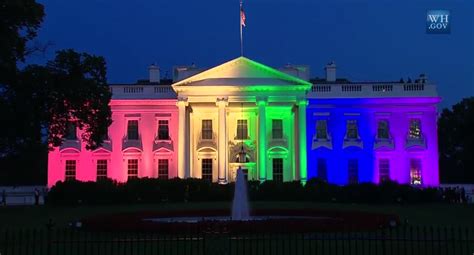 Liberals and pietists never tire of faulting us who “mix religion with politics”–even though, for leftids, their politics is their religion.

But they want Christians to compartmentalize their thought; and that’s how you wind up with professed Catholics like John Kerry and Nancy Pelosi pouring public money into the coffers of Planned Parenthood, defending and funding abortion. This is, to put it as mildly as I can, not honest.

If our “religion” does not manifest itself in the political positions we take, it’s not really our religion, is it? And when our country, as a matter of public policy, acts contrary to God’s immutable moral law, then our dear leaders drag us all into their own sin. Worse, they put our country in danger of God’s judgement–as when a few lawyers on the Supreme Court “legalize” the same-sex parody of marriage, without benefit of any law being passed by the legislature, and the, er, president orders the White House lit up with “rainbow” lights to celebrate this evil. It is wrong for Christians to support this. Instead, we should be praying for national repentance and a reversal of this course.

We are also faulted for not holding out for some mythical simon-pure righteous candidate: we should not have voted for Donald Trump, the liberals declare, because he’s a sinner and we’re supposed to be against sin. Never mind that we voted for him because the alternative, Hillary Clinton, was unthinkable. There was no righteous candidate. In 2016 the next president was going to be either Trump or Clinton, no one else. Not to vote for Trump was to help Clinton. And that was indefensible.

We cannot support public policies that are flagrantly abominable, nor the politicians who create and enact those policies. And the list of those policies would be a very long one.

So, yeah, I don’t care if my religion overlaps into my politics. I think it should. Period.

Anyway, for those of you who might be having second thoughts about having voted for Donald Trump, the Democrat alternative, Hillary Clinton, is to be honored next month by Planned Parenthood as the abortion industry’s “Champion of the Century” ( http://www.breitbart.com/big-government/2017/04/11/hillary-clinton-receive-planned-parenthoods-champion-century-award/ )–as Planned Parenthood celebrates 100 years of snuffing babies.

Crikey, who would even want to be the abortion “Champion of the Century”? What kind of person wants that after her name?

Presidential wannabe Clinton’s platform included public funding for abortion on demand. That means everybody pays for it.

Amidst the flapdoodle constituting Planned Parenthood’s announcement, we find the usual left-wing definition of abortion as one of the ways that women and girls “follow their dreams.” Democrats are always saying this. Killing your baby is how you follow your dreams. Remember when Obama described a hypothetical grandchild as a “mistake”? A mistake to be erased by an abortion. Follow that dream.

It’s a dreary and tiresome business, reporting news like this. But we do need to know what we’re up against.

When Moses found Israel worshiping the golden calf, he cried out, “Who is on the Lord’s side? Let him come to me!” (Exodus 32:26)

We cannot hide from those words.

Here’s one of the things you’ll be voting for in November, boys and girls, if you vote Democrat, or waste your vote on a third party, or don’t vote at all.

HBO has released a new TV movie celebrating, glamorizing, and rationalizing abortion ( http://www.charismanews.com/culture/59309-hbo-glamorizing-abortion-in-new-film ). It’s called Abortion: Stories Women Tell. Its aim, according to HBO, is to “focus not on the debate, but rather on the women themselves.”

Maybe I should’ve called this post, “Hypocrisy marches on.” Let’s remove the slain baby from the discussion and concentrate on the Feelings of women who have had abortions–because, don’t you know, Feelings are everything. Unless you are a live baby being torn apart so Planned Parenthood can sell off certain bits of you. Your feelings have been written out of the script.

Anyhow, abortion never, never could have come this far without the unwavering support of political liberals–and that means Democrats. Like it or not, that means Hillary Clinton: a vote for her is a vote for abortion–indeed, for abortions paid for out of your tax dollars.

Self-righteousness is no excuse for allowing innocent blood to be shed. That blood will cry out to God against you.